First plays of Chocolatiers and Bastille, Comparing The Duke and Jarl, and more! – Tabletop Gaming Weekly 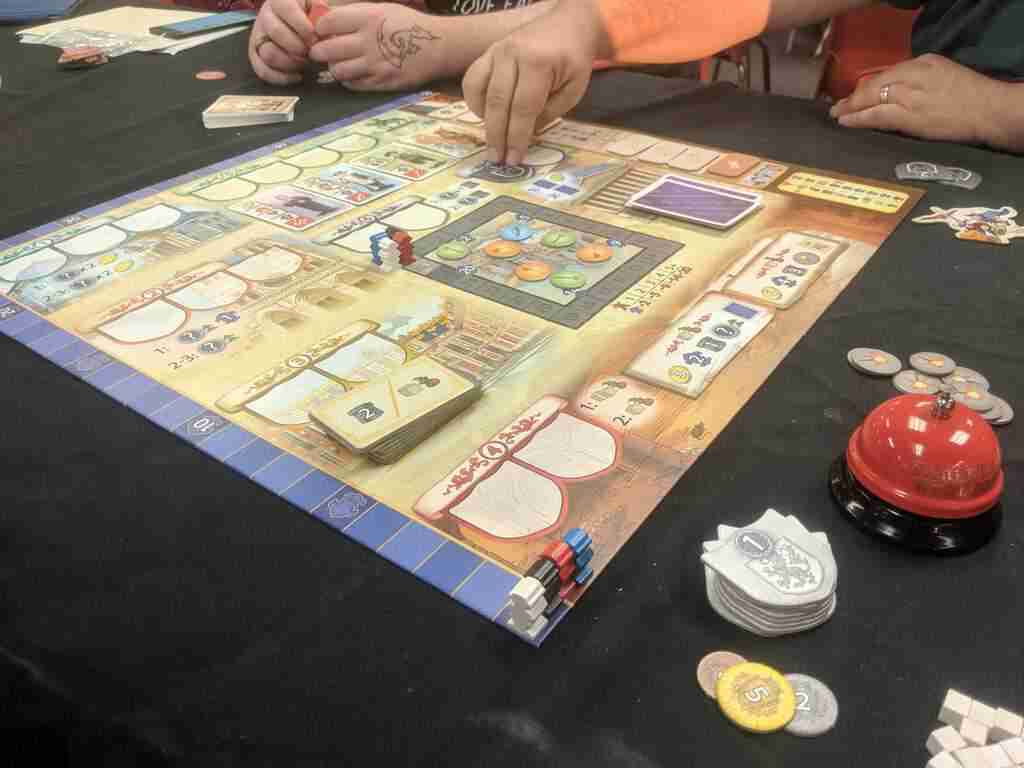 In addition to those two new-to-me games, I also played Raiders of the North Sea and Go Cuckoo at the Quodd Heroes launch party at the CG Realm.

Finally, I’m going to take a look at Jarl and compare it to The Duke.

Disclosure: Some links in this post are affiliate links. As an associate, I earn from qualifying purchases. There is no additional cost to you and we get a small kickback if you buy something through one of these links. Using these links helps to keep this blog and our podcast going. Some games mentioned in this post were provided to me by publishers for review purposes.

I got to try Chocolatiers and Bastille at the Quodd Heroes Launch Party at The CG Realm. 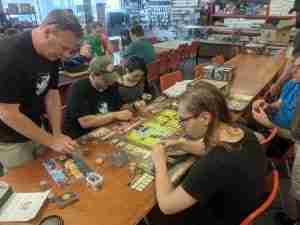 This past weekend I helped facilitate an event at one of our friendly local game stores, The CG Realm. We had board game designer Ryan Iler come down from Ottawa and show off his new game Quodd Heroes

. This is a very cool looking action selection game that uses tumbling to determine what actions you can take. During the event, Ryan and his friends ran a bunch of demo games. I personally didn’t actually play in any but watched a couple and I’ve got to say the game looks fantastic. I left with a copy of the game and the expansions and look forward to giving it a more detailed look.

While the Quodd Heroes demos were going a bunch of other games got played. First up for me was Chocolatiers

from Daily Magic Games. I picked up a review copy of this game at Origins 2019 and have been looking forward to trying it out. Chocolatiers was created by Isais Vallejo the man behind Valeria Card Kingdoms 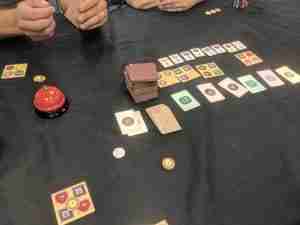 Chocolatiers is a thinky filler where players are drafting cards and playing them in order to create a box of chocolates. Each turn players either draft more chocolate cards, reserve a 2×2 sampler tile, play a sampler tile they reserved previously by discarding chocolate cards that match the chocolates in the sampler or play one of their three wildcard chocolate tokens. The game ends when one player has a full box, which is a set of six sampler tiles.

Points are awarded for being the first person to complete your box of chocolates, for collecting the most low value samplers and then for having the majority of each chocolate type orthogonally adjacent in your box.

The game is deceptively simple to teach but wickedly deep once you start playing. Trying to figure out what your opponents want and predict what sets you are going to complete is a huge part of this game, as is the placement of the wildcard chocolates. These tokens count as one of all of the different chocolates they are adjacent to, but you only get three of them through the whole game. I was surprised by how much thinking and depth there was in Chocolatiers, surprised in a good way.

I need to get some more plays in but expect to see a full review in the future. 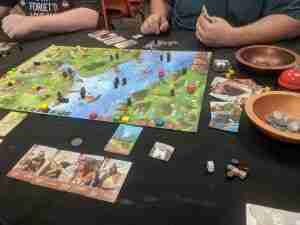 Up next we broke out Raiders of the North Sea

After some Coney Dogs, we sat back down and I broke out something new. That was Bastille from Queen Games. This was another review copy that I picked up at Origins two months ago.

is a four player game all about the French Revolution by Christoph Behre. It’s an action selection game where players are placing influence tokens on seven different action spots. Players start with three low level tokens and one of the spots lets players “level up” these tokens to be more effective. All action spots have two levels of reward, one for the player who plays the token with the most influence and another for every other player. Some of the spots are more effective if higher influence tokens are used. 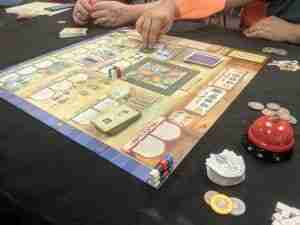 Players are using these tokens to get money, to recruit allies to their faction, to equip those allies with weapons, to explore the catacombs under Paris, and to improve their level in the Bastille. All of this is done to get points, and those points are awarded for a ton of different things. There are progress tracks, set collection, set majority, and even random pulls from a cube bag.

There’s a lot going on in this game and at this point I’ve only played once, so I’m going to save the details for a future review.  Right now I will say that I love the look of this game, and that’s not due to beautiful artwork but rather for having a very clear, easy to see and effective board. Even with my ageing eyes, I can see everything I need to see clearly from across the table. Something I really appreciate. 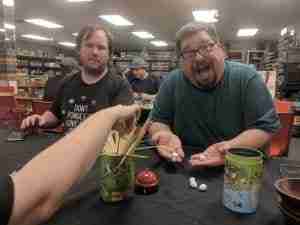 As for the gameplay, I found Bastille to be a solid medium weight game. I really liked the way the influence system worked. I also liked that there seemed to be a variety of different potential paths to victory. I’m looking forward to playing this one more.

The final game we got in, right at the end of the night, was Go Cuckoo

. At this point my review is live and if you really need to know more about this game I suggest checking out that review. We did have two people trying it for the first time on Saturday, and of course, they loved it.

Sunday night my wife and I compared The Duke to Jarl

Something amazing happened this Sunday. Two weeks in a row now, my wife and I had a night out to ourselves. Since we had such a good time at The Sandwich Brewing Co. last week we headed back. Like last week I brought The Duke

with us, but in addition to that, I also grabbed Jarl 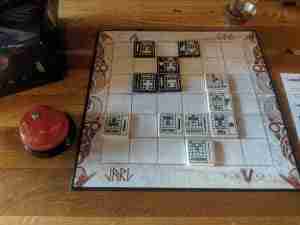 For those that don’t know Jarl is a follow up to The Duke that was released as a tie in with the Vikings TV series, back when the show was at it’s hottest. It uses the same mechanics as The Duke and even has something like “Powered by The Duke” on the box. My first impressions of Jarl back when I first got it was that it was significantly heavier than The Duke and somehow less fun. We tested that theory Sunday.

We started off with Jarl and both my wife and I were immediately struck by how much more complicated the pieces are. There are more symbols in Jarl in general, but in addition to that, each piece seemed to use way more of them. The Jarl tiles themselves in comparison to The Duke tiles (which either move in a straight line horizontally or vertically depending on what side they are flipped to), has four movement options, four jump options and also has a shield, that’s just on one side. The other side has two shields, two moves and four jumps.

The prevalence of shields continues to the other tiles. Many tiles in this game have shield icons and a new icon which is an outline of a shield. That works to protect the piece in a spot under the outline as opposed to protecting the piece with the shield. Another new set of symbols are small dots. These are moves and jumps that work the same as in the base game but you can’t use them to capture a piece. 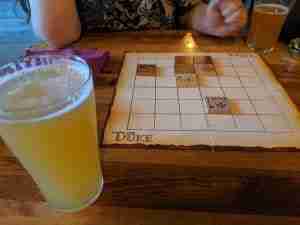 What all of this combines to mean is that there are way more tactical options in Jarl and many of them are defensive. This leads to a much more strategic game and also a way longer game. That’s where I think Jarl fails over The Duke for my wife and I. Our The Duke matches are fast and furious and we often get in two to five plays in one sitting. There is some randomness in The Duke but that’s mitigated by the fact that if you lose over a lucky draw, you just start up another game and try to get revenge. In the time it takes to play one game of Jarl we can finish two or more games of The Duke.

Overall I think Jarl is probably the better gamers game. It’s less random, more tactical and more strategic, but we just both found it was less fun. My wife, in particular, noted she never feels the need to play Jarl again.

So that’s what hit my table this week for #WhatDidYouPlayMondays. What hit your tabletop?