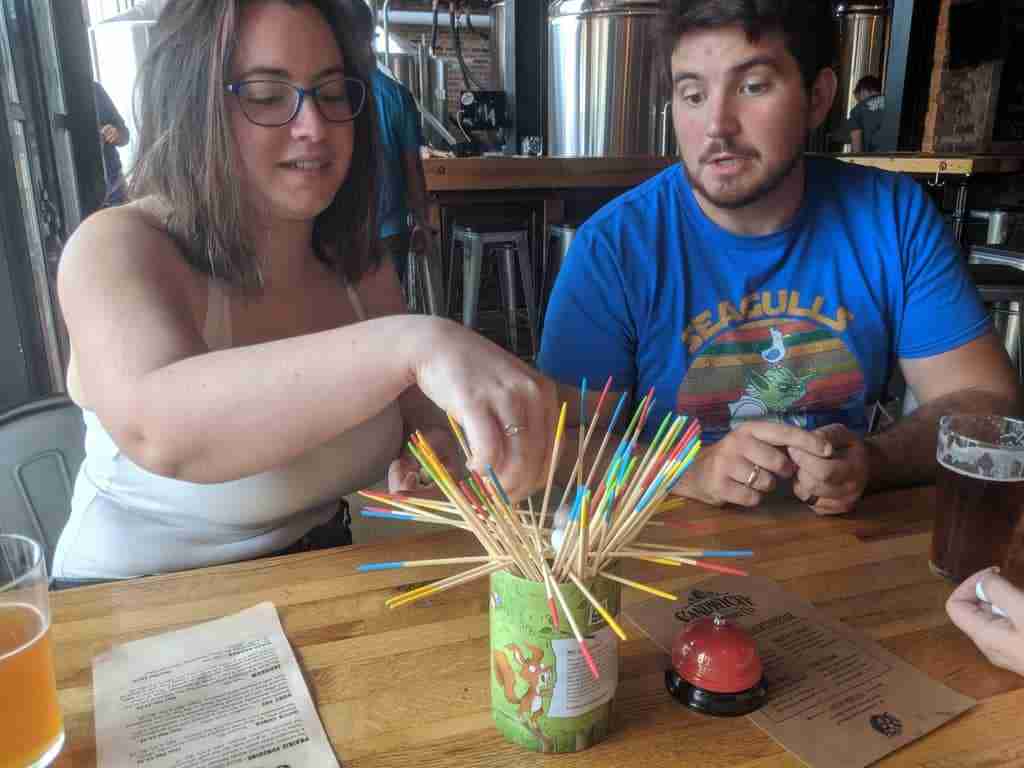 This past Saturday, Deanna and I had a gaming double date night with Kat and Tori, who some of you will know from our Gloomhaven streams.

Besides some great food and drink the four of us got in quite a few games. Go Cuckoo, The Game, Red 7, The DC Comics Deck-Building Game: Confrontations and a game of Raiders of the North Sea.

In today’s weekly re-cap I’m going to talk about all of those games.

Disclosure: Some links in this post are affiliate links. Using these links costs you nothing extra and we earn a small amount from qualifying purchases, which helps to keep this blog and podcast going. Some games mentioned in this post were provided to me by publishers for review purposes. 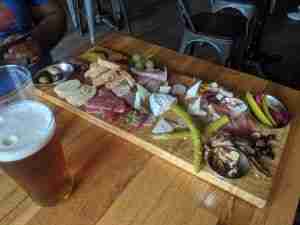 One of my hobbies, other than gaming, is slight beer snobbery. An old friend who has since moved far away to Edmonton got me into reviewing beers and posting those reviews online through sites like Ratebeer.com. He taught me what to look for in a beer and how to identify various flavours and tastes. He took it way more seriously than I did, but I still enjoy playing the beer snob now and then. Part of that is visiting local (and non-local) breweries and the latest my wife and I have discovered is The Sandwich Brewing Co, right here in Windsor. Every beer we’ve had from them has been excellent and they make the best charcuterie boards in the county. 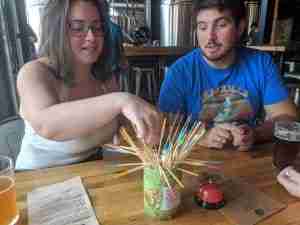 The Sandwich Brewing Co. is where we started our double date. We ordered a couple of large charcuterie boards and I broke out the first game of the night: Go Cuckoo

Despite gaming with Tori and Kat at least once a week, including on Fridays where we play Gloomhaven, neither of them had gotten to try Go Cuckoo yet. Of course, they loved it. As I said in my review of Go Cuckoo, everyone I show this game to loves it. Tori, in particular, kept noting how good he thought it was as we played. 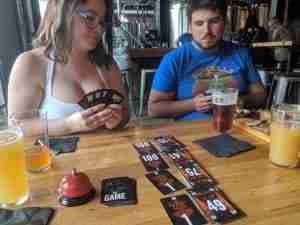 Up next I brought out the unfortunately named game: The Game. The Game is a very simple to teach cooperative card game. The deck consists of one card each numbered 2 to 99. Each player starts with six cards. You have four piles you play cards into. Two of the piles are going to count up from 1 to 100 and the other two piles count down from 100 to 1. Each turn players have to play at least two cards. The goal is to play all 98 cards. There is one special rule that if you can play a card exactly ten apart from the card on the top of one of the piles you can jump back.

While Deanna and I normally aren’t big cooperative game fans, we do dig playing them with Tori and Kat. We learned this by playing a full campaign of Pandemic Legacy

together before starting up our current Gloomhaven

We played two rounds of The Game. The first we did okay, but it was a learning game for all of us. The second game we rocked it.

Overall The Game was actually way better than I remembered. For such a simple concept, it works really well. It also proved to be a great game for playing at the brewery as it doesn’t take up a lot of room and while we had to work together to play, it didn’t take all of our focus so we could continue to have other conversations while playing. 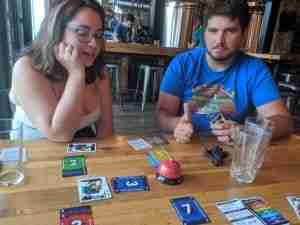 . This is another quick to explain card game, that I think is perfect for this kind of venue. In Red 7 the only rule is: at the end of your turn you must be winning, otherwise, you lose. Each turn you need to play one card from your hand, you can also discard a card to change the current rules of the game. When you do that you must be winning. The deck has eight colours each with seven cards, numbered 1 to 7. Each colour represents a different rule. Rules include things like “the highest card”, “most cards in a row”, “most cards of the same colour”, etc.

I’ve loved Red 7 since I first discovered it. Kat and Tori also seemed to dig it, but Deanna found that playing with the full rules made the game go on longer than she would like. You can play this one in a variety of modes and I think we would have had more fun just playing multiple single rounds and not really even caring who won.

After Red 7, full of cured meats, cheese, nuts and fruits we headed back to my place for more gaming.

Back home we played a team based board game, guys vs. girls and finished up with some Viking raiding.

When we first decided we were going to get together Saturday night, Tori right away asked if we could play a game off his Pile of Shame. That game was The DC Deck-Building Game: Confrontations

. This is a team based version of the classic DC Deck building game where one team plays the villains and the other plays the heroes. Instead of attacking a character deck placed in the centre of the table, the teams are attacking each other.

For this game we played girls vs. boys with Tori and I taking on the Hero side and the girls playing the Villains. I had Aquaman, Tori took Superman, Deanna chose Lex Luthor and Kat played Circe. 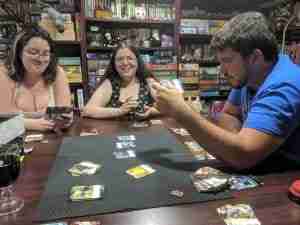 While I have played the DC Deck-Building game

in the past, it’s not a series of games that I personally own, and I haven’t played any of the games in the series often. So, I’m probably not the best person to compare this new player vs. player edition of the game to it predecessors. I did think it felt more engaging due to the fact that we were attacking each other. I also liked that when you defeated an enemy your deck didn’t get better because of it, something that I found could lead to a runaway leader problem in the original game.

While we had fun playing, it wasn’t the best experience. For one, I’m getting old and the font on the cards is small and hard to read. Deanna had the same problem. We kept having to pick up all of the cards from the purchase row in order to read them. Another issue I found was that the cards had fiddly abilities. They didn’t just do one thing, they also had assist abilities and many of the abilities had you looking for other things. Like this card gave one power for every seven cards in your discard pile. Or this card does this unless it is played with an equipment card, in that case, it does that. I personally wonder if this is due to the fact that the game has been around for a while and they are trying to make it feel fresh by adding new abilities, thus bloating some of the cards and mechanics?

What all of this led to was a very long game. Now I will admit that part of this was our own lack of focus. Our game night did start at a brewery after all. While Confrontations seems like a cool way to play, I think to play it well and really enjoy it, this game requires more focus than we were capable of. Right now I would be willing to give it another shot but I won’t be rushing out to buy my own copy. 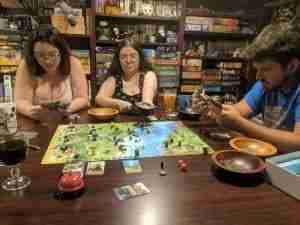 . To be honest, it was probably a mistake breaking this out as the last tabletop game of the night. It’s just that I have been enjoying this game so much and neither Kat or Tori had gotten to try it yet.

Kat did seem to dig it, being the only sober person at the table at this point. Tori on the other hand just didn’t really grok all the rules. Deanna and I, having played before were fine but I really did make a mistake breaking this one out as late as I did.

Now I said that was the final tabletop game of the night. I worded it that way because the night was far from over at that point. The thing is that after playing Raiders we moved over to the other side of the room, turned on the Xbox One, set up the drums, passed out some guitars, grabbed a mic and finished off the night with some Rock Band Four

, playing through the amazing Rocumentary mode. This is a tabletop gaming blog though so I won’t bother going into details about that. I will just say it was a ton of fun and we didn’t wrap up until 6am or so. 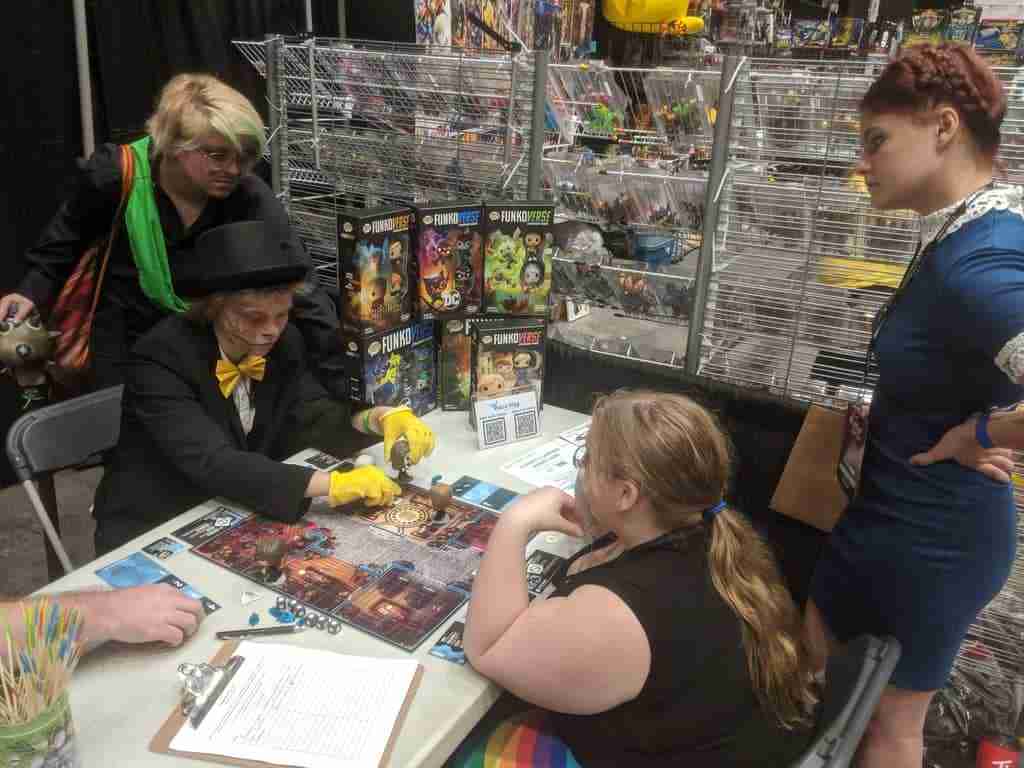 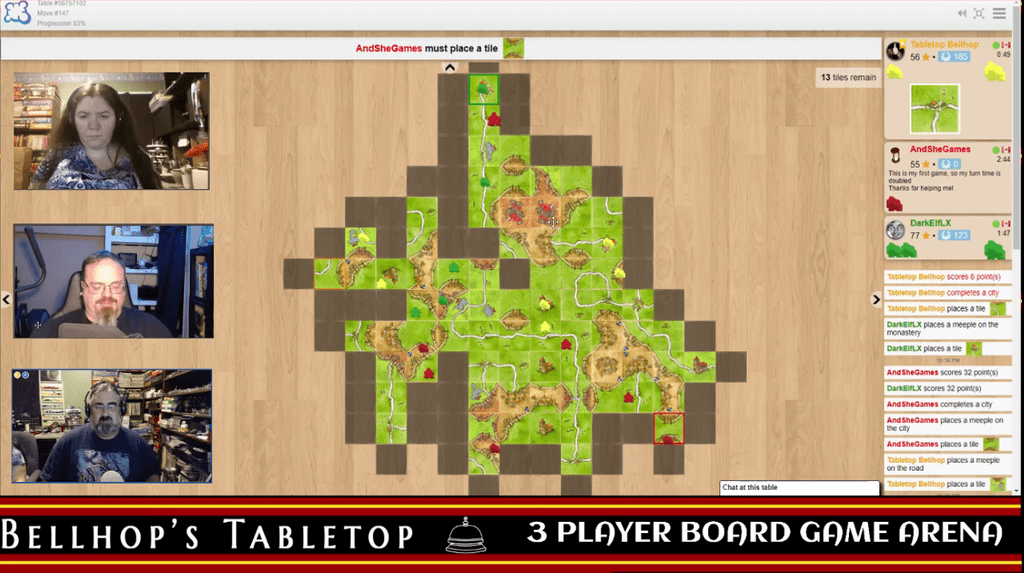