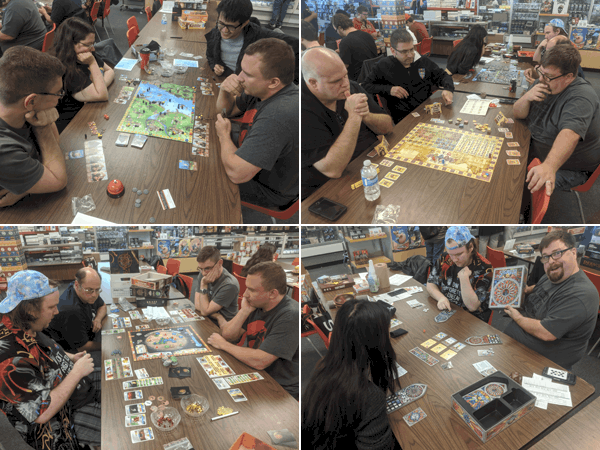 Saturday I hosted a Board Game Blitz charity board game tournament raising money for our Windsor Extra Life 2019 efforts.

This five-round, no elimination tournament was our last stop on our 2019 Road to Extra Life, before the big event on November 2nd and 3rd.

At the tournament, we raised over $60 #ForTheKids!

Disclosure: Some links in this post are affiliate links. Using these links costs you nothing extra but we do earn a small commission on qualifying purchases.

What is The Board Game Blitz 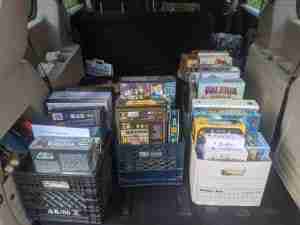 I have hosted a few of these tournaments over the years in Windsor and they have always been popular. Sadly the Great Canadian Board Game Blitz fell apart in 2015 when the head organizer departed. There hasn’t been an official Great Canadian Board Game Blitz since, but I have taken the original format and run a few local Blitz tournaments using the original rules. The last of those, I hosted this past weekend at The CG Realm as part of our 2019 Extra Life efforts.

Each round of the Blitz a selection of games are featured. Competitors pick which games they want to play (at first in random order but then based on overall player rank) from this selection. As games fill up to the max player count (three or four depending on the number of tournament participants) the choices get more limited. Once all players have chosen a game, the games get played. Players get points based on their placement (1st, 2nd, 3rd or 4th place). These points are weighted based on the length of the game.

For Saturday’s event, we had five rounds. Two short rounds, two medium rounds and a long round.

At the end of the day, players overall points are totalled and the winner is the player with the most points.

We started the Board Game Blitz with ten players. We had a couple of players join in during later rounds and a couple of players decide to leave during the dinner break. Overall we had thirteen different participants. I do have to admit I was disappointed with the turnout. Having this event on the weekend of Canadian Thanksgiving was probably not the best choice. That said, everyone who did attend had a great time and it was a very fun event.

At the end of the day, it was Shumi Wang who took first place with 33.5 points. Deanna Tousignant followed with 28.5 points. Sean Hamilton and Quy Van were tied for third with 27 points and the two of them decided to roshambo to determine a winner. Sean won with his deft use of paper on Quy’s rock.

We raised a total of $66 for Extra Life and I want to thank everyone who took part in the event. Special thanks to the people who were willing to teach games during the event so I didn’t have to teach every game every round. Also a big thanks to The CG Realm for giving us a place to play and for topping up the prize pot.

Board Game Blitz Round One Summary

Summary: This was a great start to The Blitz. These games are lighter thinky-fillers that I think got people into the right mood for the rest of the tournament. I tried to pick games that were not too random and actually rewarded good play. Next year I need to leave more time for getting things set up and I need to remember that even half-hour games take up to an hour when players need to learn to play.

Board Game Blitz Round Two Summary

Summary: I was again happy with the game selection. The only problem that really happened here is that I had planned on having four players for Eminent Domain. Oddly enough, as I’ve talked about here on the blog, Eminent Domain actually plays faster with four players than with three. That particular table ran a bit long. Overall by the time we had finished this round we were about forty-five minutes behind where I hoped we would be. Thankfully I had scheduled the event extra long just in case of this happening. Next time I need to remember to leave a full hour for both of the short games even if I plan on one of those only being a half-hour game.

Board Game Blitz Round Three Summary

Raiders of the North Sea

Summary: Round three was one of the best rounds yet. The game length was perfect. We had people who could teach all the games. Everything just went as it was supposed to. I personally spent most of this round teaching and then watching the game of Strasbourg. That game features thirty-five auctions and was the one I was worried the players would have the most trouble with. It was nice to have players who knew the other games there so I could focus my attention on the one game.

Board Game Blitz Round Four Summary

Summary: This was the first round where we had someone new show up in the middle of the tournament. This isn’t something that has happened with past Blitz tournaments but it is something that is allowed by the rules. You can drop out or in as you want, you don’t need to play every round. The only penalty is that you won’t score points for rounds that you don’t play in. The way the points are weighted based on game length it is possible for someone to skip the first couple of rounds and still win the tournament. This is a fact I think we need to advertise better the next time we have a blitz. One of the complaints we did hear during the event is that it is just too long. People cannot commit to gaming for so many hours, so letting people know they don’t have to be there for the entire event may get more participants out.

Board Game Blitz Final Round Summary

Summary: Now here is where I made my biggest mistake of the tournament, and it was all about the time it takes to teach and play the heavier games in this round. Both Teotihuacan and Anachrony went way over our planned time limit. For Anachrony, it was all about just how long it takes to teach that game. For Teotihuacan it was more about that table seeing how far behind the Anachrony table was taking and then taking their time because of it. They even had a coffee break in the middle of their game. This left the Terraforming Mars table, which actually finished way under time with the main reason for that being that it was four players who all knew the game well. The day before the event we even took the time to take out the Corporate Wars variant for Terraforming Mars because we thought that was the game that might end up going long. In retrospect, we should have left the expansion in.

A big thanks to Ian and The CG Realm for staying open late and letting us play out full games for this final round. Also thanks to the players who stuck around until the end for prizes to be awarded.

The biggest disappointment for me was our turnout for the event. None of us realized we had scheduled this event for Canadian Thanksgiving until it was far too late to change the date. We also had problems advertising the event due to the limitations of Facebook. While I did promote the event on Board Game Geek, I think I got that post up too late. 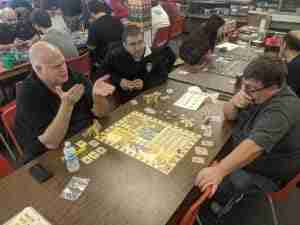 Everything else about the event went extremely well, up until the last round. I spent a ton of time before the event printing board game rule summaries and player aids and those really helped with teaching the games and for reference during play. Every game had someone willing and able to teach it, which was fantastic. That was the silver lining of having such a low player count. Games all went well, players played competitively as well as congenially. Everyone had a great time playing together and there were no disputes that needed to be settled.

I do need to be more cognizant of teaching times for all of the games. Over the years I’ve learned that the average playing time listed on Board Game Geek for most games tends to be very accurate. It’s what I use when planning any of these Blitz tournaments, but I have to remember that the time on BGG does not include any time for teaching. This hurt us most in the first round and the last round. The first round, as I expected it to be lightning-quick and get us ahead of schedule and it was not, and the last round as two of the games took about an hour to teach. That just doesn’t work when you only allocate two hours to play. 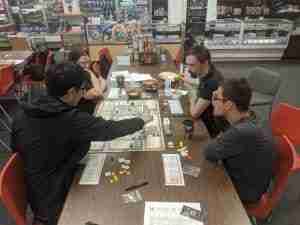 Most of the feedback we received at the event was very positive. The one recurring theme though was that people thought the event was too much of a time commitment. We got that feedback from people at the event as well as people who chose not to attend for that reason. Due to this, I think any future Blitz events I host will be limited to four rounds maximum and I may even consider doing three round tournaments in the future.

Overall I think the event was a great success. It could have been better, but everyone who attended had a great time and we did manage to raise some money for Extra Life, and every little bit raised for that counts.

Have you ever taken part in a Board Game Blitz? How about some other form of board game tournament? What did you think? 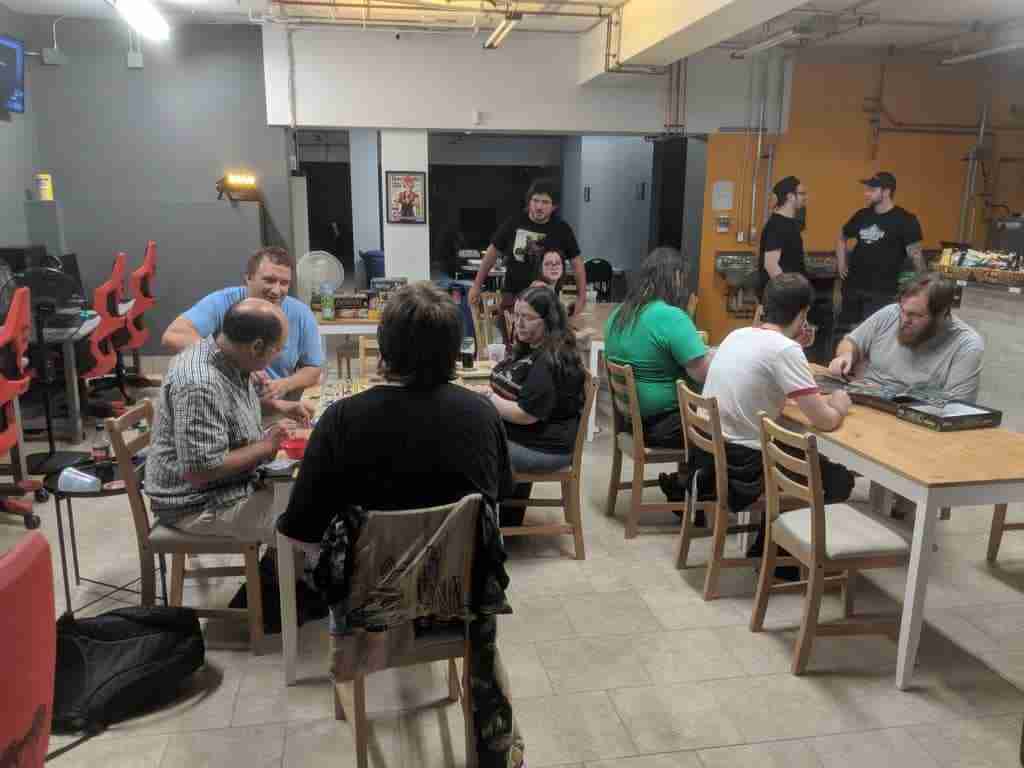