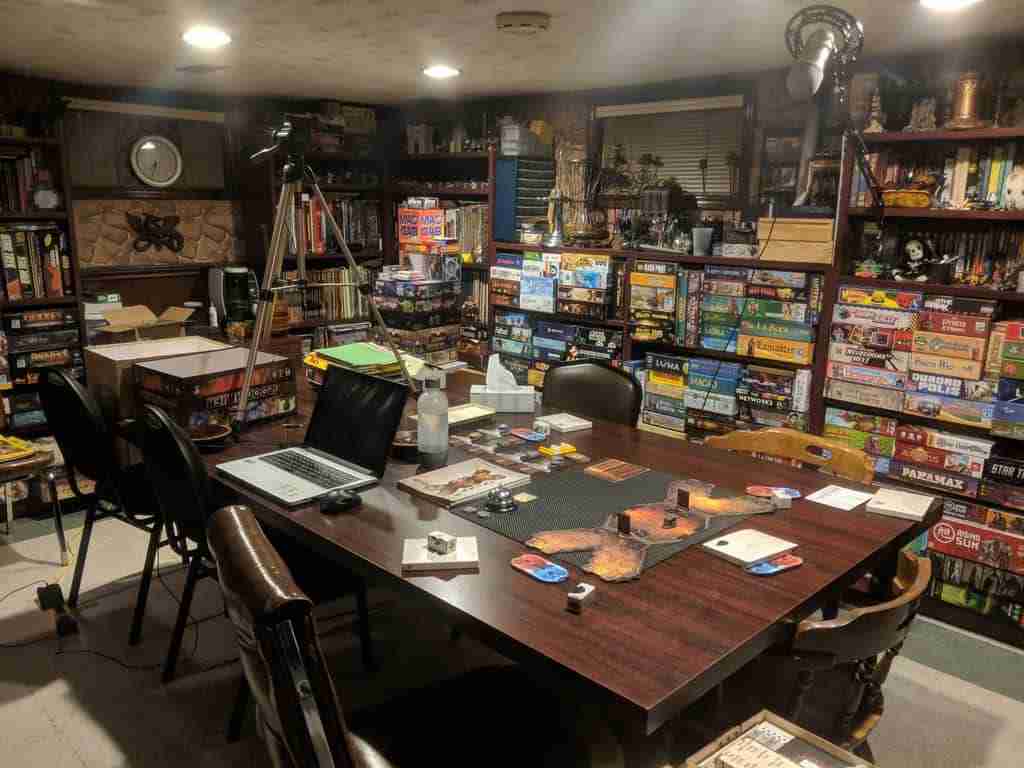 Last Friday we tried something new. We live streamed our play of Gloomhaven.

I think it went well. Well enough that we are going to plan to live stream all of our future Gloomhaven games on The Tabletop Bellhop Twitch Channel.

The other big gaming thing that happened this past week was my annual Gaming In The New Year party! We had a good turnout and lots of games got played.

Gaming In The New Year 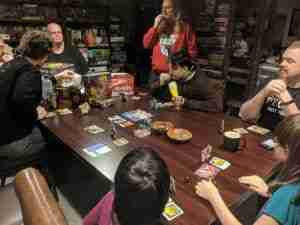 So the big thing that happened this past week is that on Monday night/Tuesday morning it changed from 2018 to 2019. Myself and a group of friends celebrated this occasions by playing games. Lots of games. So many games that it’s way too much to talk about in this, our regular Tabletop Gaming Weekly blog post.

Due to this I created a post all about this years Gaming In The New Year party. In it I talk about all the games I personally played. There were eight of them.

We are now going to be live streaming Gloomhaven

Friday night Tori, Kat, D and I played through mission 5 of Gloomhaven, Ruinous Crypt. We did something different this time, something we hadn’t done before. We lived streamed the entire game on Twitch. 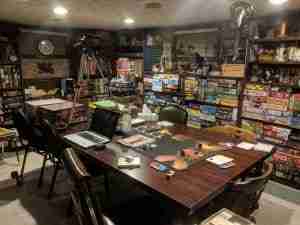 We brought D’s laptop downstairs. I set up a tripod on the game table. Hooked up my webcam to the tripod. I took my new Yeti Mic (thanks Sean) downstairs and attached it to one of the bookshelves like a boom arm. I even went into Streamlabs and set up a new template for the stream. One that has the Cephalofair logo, the Gloomhaven box cover and the current scenario we are playing on it. I also made sure to include Spoiler and Explicit tags.

I would love to say it went smoothly but man it did not. There’s something up with my PC version of StreamlabsOBS that messed everything up. When I loaded my shiny new scene on the laptop and got ready to broadcast, everything was out of place. Fonts were wrong, audio inputs were missing, etc. That combined with the fact that my webcam and D’s laptop don’t get along, led to a very frustrating hour of technical difficulties.

In the end, with some help from Sean, we managed to get it to work.

I’ve got to say once everything was working it looked great. The stream heath was solid. We didn’t have a lot of lag and weren’t dropping many frames. The camera angle seemed to work and the makeshift boom mic actually worked better than expected. Overall I think that streaming the game went well.

Even better than how well it seemed to be going, we were getting viewers and new ones. We had some of our regulars in chat which was awesome but we also had some new people show up and gained some followers which is amazing. We even had one person join the chat, fentoncrackshell, who knew the game really well and caught us on some of our mistakes.

I’ve got to say that part was awesome. I also have to say: wow we suck at Gloomhaven. There must have been five times we got called out for either missing a rule, interpreting a rule wrong or not using a rule to our full advantage. In almost every case we were making things way harder on ourselves than they should have been (there was one time we forgot to activate a group of monsters, so it did go both ways).

I know fentoncrackshell was worried he would annoy us but I welcomed the advice and corrections. I much prefer playing a game properly by the rules and I was happy to be corrected. Now a big part of that could have been that in most cases we were actually hurting ourselves so the advice was making the game easier, but I would like to think I would have liked the criticism even if it made the game harder.

Now that we’ve successfully streamed this one game, we are planning to stream all of our future plays. We all enjoyed it from our side. The camera and mic weren’t intrusive in any way and it was fun getting to interact with the chat while we played. It also seemed like there’s an audience for Gloomhaven actual plays, which is cool. I just hope fentoncrackshell joins us every week to make sure we follow the rules 😀

So going forward you can join us as we play Gloomhaven every Friday. We’re going to try to start the show at 8:30 eastern at the usual place: Twitch.tv/tabletopbellhop

Now as anyone who reads this blog regularly knows, we sometimes have a problem getting the group together. If that happens we will be sure to send out as much advance notice as possible. If only one or two of us has to cancel we may end up streaming us playing some other game. I may take it as an opportunity to work on my #LessShameMoreGame resolution.

So how did mission 5 go?

Well besides the fact that we embarrassed ourselves live on Twitch by messing up some rules, I think the game session went okay. We did okay, we won, but could have done much better. 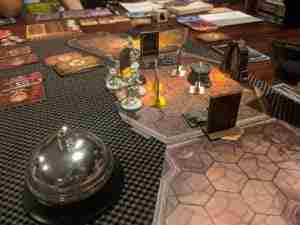 We again played on easy, which at this point put the scenario level at 1. We started off the mission strong despite a scenario effect that was quite debilitating the first turn.  Our rhythm seemed to be good at first until turn two.  That’s when the four player problem hit.

My character is all about area damage and damaging people either next to me or next to my opponents. Due to how limiting this first room was and despite the fact I warned everyone to not be near enemies by the time I got to go, by the time it was my turn I had two choices. Waste both my cards or severely hurt the party probably killing both of our summoned creatures. So my turn was wasted.

Then turn three something similar happened. We planned out our strategy, I was going last. Again by the time it got to me, due to how the enemies moved, how well my allies drew cards, and just how things changed in the game, by the time I got to act I could not use either of the moves I had picked. At least this time I was able to use the opposite sides of the cards to do something.

Now this only happened twice, but I thought it was worth noting that it did happen again. The previous couple of maps were more spread out and we didn’t seem to get in each others way as often. Since we are back to a tighter map, or at least starting room, it has become a problem again. 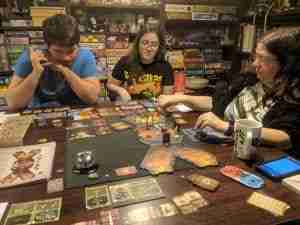 So this is the reason we are playing on easy. So that when this happens it’s annoying but not devastating and that was the case here. Once we got past the initial room we were able to split up and spread out and getting in each other’s way wasn’t a problem.

Things went well for a while but when Kat’s Spellweaver tried to pull a Panda move (eats shoots and leaves, enter a room do some damage and run out) and managed to get out initiatived by a demon (despite having a 7 initiative) she died. Sorry, I should say she became exhausted. You don’t die in Gloomhaven, you just end up exhausted and sit out for the rest of the scenario.

So Kat was out for the rest of the game. Which sucked for her. What was even worse is that when fentoncrackshell joined us in chat later in the game he noted a way she should have survived. Like I said above we were making it harder on ourselves than it should have been. 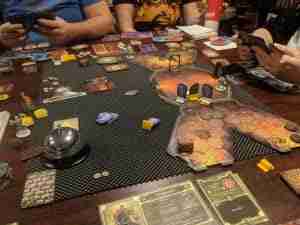 Despite losing our Spellweaver we were able to finish the mission. We were also able to grab the treasure chests in the scenario but not much of the gold. I think the only difference having Kat still around would have made is that we probably would have had a round to gather some gold.

At the end of this scenario Kat had enough to level up and we all had some money to spend. So we probably should head back to town.

Gloomhaven has a whopping 59 page rulebook. Surely we aren’t the only ones making mistakes. What rules did you mess up? Let us know in the comments.