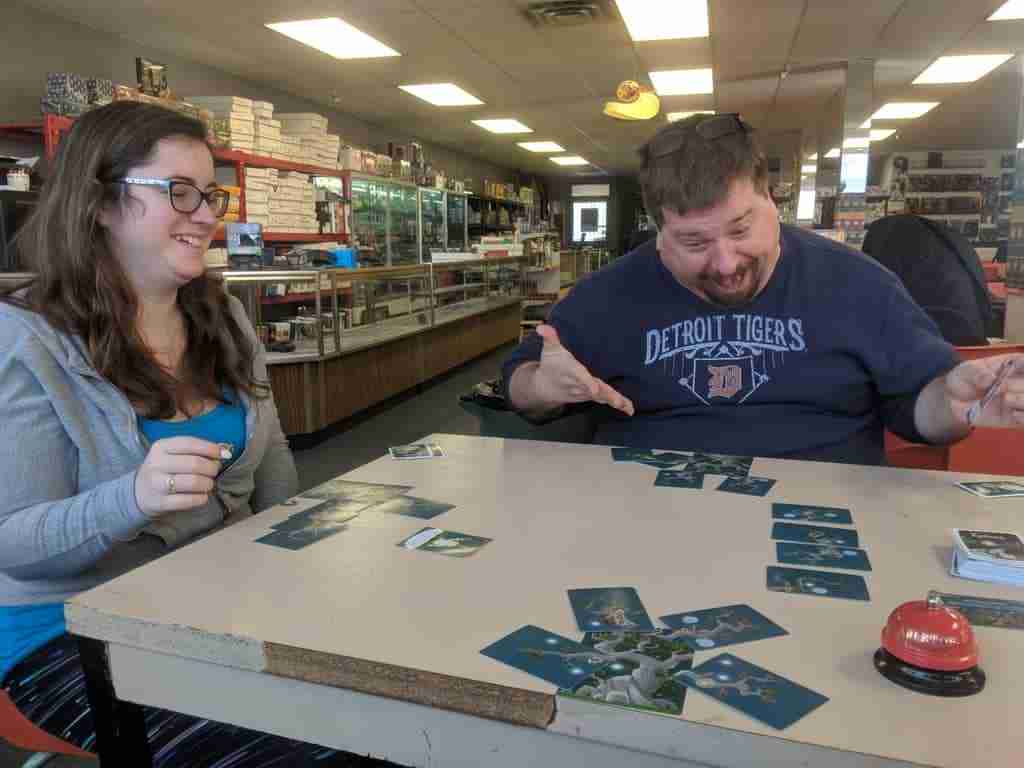 Our Friday night Gloomhaven game ended early and we got in a game of War Chest, four players.

Then Saturday I hit up The CG Realm and got in another play of War Chest (2 player this time), Kodama: The Tree Spirits and a four player game of Immortals. In this post I’m going to talk about all three of those games.

. I do have to admit it’s not getting played as much as I thought it was when I first got it for my birthday, so it was cool to get two plays in this past week. I’m especially happy to have gotten to play it four players. 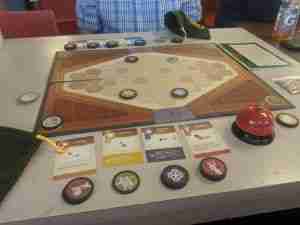 Deanna and I  played a four player game with Tori and Kat after our Gloomhaven stream on Friday. I’m pleased to report that it plays just as well with four player as with two. With four players it becomes a team based game, with team mates sitting opposite each other so that each turn a player from a different team goes. Each player only gets three units instead of the usual four and you have to capture eight control points instead of six using the full board. The rules for four player are pretty much identical to two player other than that. The only other real rule is that you can’t take the initiative token from your teammate.

Saturday I attended the twice monthly board game night at The CG Realm and there I taught and played a two player game with local gamer Paul. This game didn’t go quite as well and taught me a good lesson. When introducing the game to new players stick with the recommended armies. What I had not realized until Saturday is that the eight recommended armies are the ones with the most straight forward rules. I had thought that these units were recommended for balance but it seems they are also recommended for ease of teaching.

Overall I’m very impressed with the game and recommend it for anyone who is at all a fan of abstract strategy games. 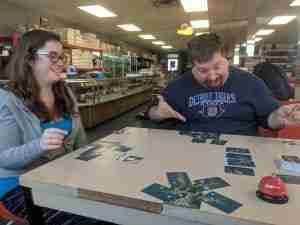 Another game that got played Saturday at the CG Realm was Kodama: The Tree Spirits

. I ended up grabbing this one when a game of Gizmos

ended around the same time as my game of War Chest and we had five gamers looking for something to play. The only two games I had with me that handled five players were Kodama and Immortals. As it was still early in the night, a lighter quicker game seemed to be in order. It ended up that Paul actually really wanted to try Gizmos so I didn’t need a game that played five, but I had Kodama out so we played it anyway. In the end, it was a three player game. 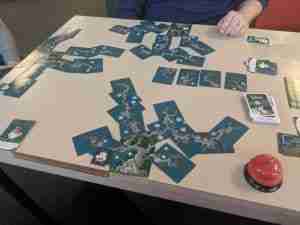 The more I play Kodama (this was my third play) the more I’m liking it. I re-read the rules before playing and noticed an important rule that I know I missed the last time we played. When playing a new branch on your tree, if it would score more than 10 points you can’t play it. That would have really changed things up on our last play. I find this to be a really solid rule as it stops people from just making a tree with one long branch with one repeating feature on it. 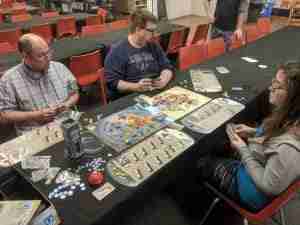 for the first time, I’ve been itching to play it again. We all went into that last play with the wrong expectations and it really wasn’t a fun first experience. Now knowing exactly what the game is like and having figured out some of the more fiddly rules I was really looking forward to playing again. I got that chance last Saturday, when we ended the CG Realm game night with a four player game of Immortals.

Thankfully this game went significantly better than our play with Sean. A big part of that was not only knowing what to expect myself but explaining to the other players what they can expect from the game. Having enthusiastic buy in before we started really helped out this play. 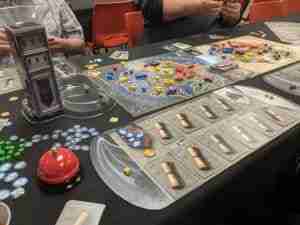 Having now played Immortals twice I must say: this is not a dumbed down Wallenstein

. While similar to it’s predecessor this is much more of an American style game. It’s much more random and way more aggressive. There is a ton of back and forth and due to that long term strategic planning is almost impossible. It’s much more about tactics and adapting to the ever changing game state. It’s more reactionary. There’s also significantly more to think about at once, the cognitive load is higher as it’s like playing two area control games at once with the light and dark sides of the map.

Overall I think I dig it. What I’m not sure is if I dig it more or even as much as Wallenstein/Shogun. I will say that if you know players who didn’t think there was enough conflict in the older games, they should check this one out. As for me, I need to play it a few more times before I make up my mind.

So those were the games I played this past week. What games are on your #WhatDidYouPlayMondays list?