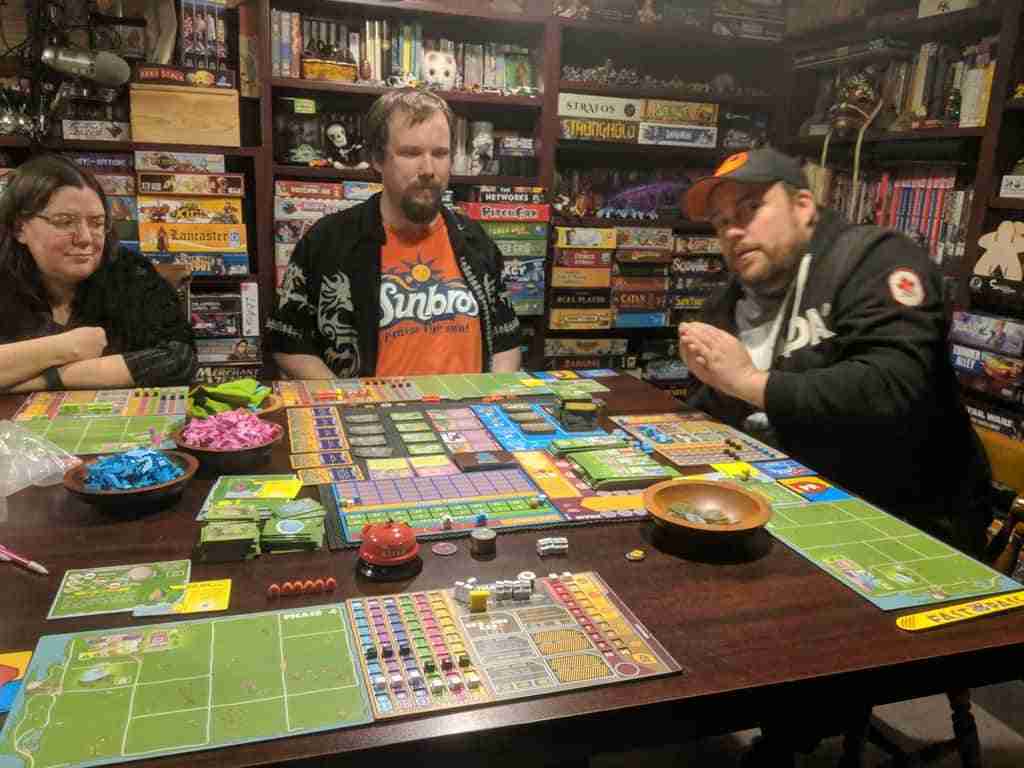 This was followed up by a play of Jim Henson’s Labyrinth.

I ended the week off with another big game of Xia: Legends of a Drift System with all of the bells and whistles. 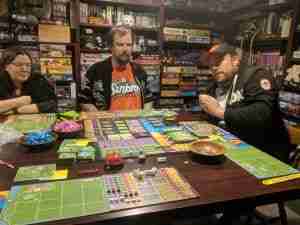 I hinted about this during the podcast on Wednesday: the first thing that you find in Totally Liquid

is a section on making the game longer. This is an update for the base game, whether you are playing with the expansion or not. If you’ve been following along with our plays of Dinosaur Island

, you should know that my biggest complaint with the game is that it’s over too quickly. I find it very interesting that not only have other fans complained about this but that Pandasaurus has heard this and/or realized it themselves and addressed it right at the start of the first expansion.

So that’s the first change this expansion brings. You now deal out way more objective cards. For example, in a two player game, you deal out five cards and not three. The game still ends when only one card is left unclaimed.

The rest of Totally Liquid is a series of modules that you can add, in any combination, to the base game. We tried all but one of them out, all at once. Which actually went rather well. None of these modules are overly complicated or add so much to the game that it becomes overwhelming. Though we did find some modules better than others.

The one module we didn’t use adds a fifth player. There’s a bit more to this than just new player boards, though, with a new player the market actually expands as well and there are a few other rule tweaks. 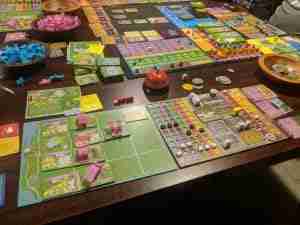 Next, we have Water Dinosaurs. This is an odd addition. It adds a fourth dinosaur type to the lab phase. What’s really odd about this is that the deck of dinos is very random. In the base game, all of the same type of dino do the same thing, they just cost different amounts of DNA. These water dinos are all over the place. Some are hard to research, give a ton of threat but are easy to make. Some give no threat but are hard to make. On one hand I like that not all dinos are the same, but on the other hand, I can’t see how some of the high threat dinos are balanced at all.

Park Extensions and CEOs adds a draft to the start of the game. In turn each player picks a park extension or a CEO. Then after each player has picked one it comes back around in reverse order and players pick whatever they didn’t pick the first time. Both of these new elements add an asymmetric element to the game. I have mixed thoughts on this module too. Besides the CEO tokens being silly and pointless, the various new things were all rather complicated. One person was hatching eggs, another was raising goats, a third kept swapping out CEOs every turn and the last had a huge Mega-Rex pen to show off. All of this just seemed to take the focus away from the main game.

I did like the Blueprints module. Each player gets two blueprint cards at the start of the game and picks one to keep. This shows a park plan, detailing where the player should place everything in their park. At the end of the game, players get points for how well their park matches their plan. This is a cool addition that makes where you place stuff matter. I dig it and will probably use it every game.

Another module I really liked was the PR Module. This also gives players direction by giving them two hidden scoring goals to work towards during the game. What I dig about this one is that you get two cards at the start of the game but don’t have to decide which to actually score until the end. So if one strategy isn’t working out you can change focus mid game.

In addition to these modules, you also get some new DNA dice. These have some new symbols on them that allow you to upgrade your security or get some money. There are also lots of new cards that just get added to the original ones in the base game. New objectives, specialists and plot twist cards. There’s also a new lab upgrade that makes your tool bench better.

Overall I really liked the longer gameplay created by adding more objectives. That’s a great fix for the short game problem. All of the additional dice and cards and lab tiles are welcome additions to the base game. It’s some of the modules I’m on the fence about.

for Deanna for Xmas back in 2017 and it’s been on our pile of shame for over a year. We just couldn’t find anyone willing to play it, until now. Monday night after Dinosaur Island we were talking about pile of shame games to play next week when I mentioned Labyrinth. My friend Mike asked how long it was and when we realized we had the time he suggested we play it right then and there.

Now I  had heard bad things about this game. Deanna loves Labyrinth and I bought the game due to that, despite many negative reviews. Plus, it has some really cool miniatures. I wasn’t expecting a good game. What I wasn’t expecting is just how bad it is.

I wrote up a separate review of Jim Henson’s Labyrinth as I think it’s worth warning the world about this game. Check that out if you have time. What I will say here is that the only reason to buy this game is if you find it dirt cheap (which is easy to do) and you want some cool Labyrinth miniatures to paint and/or display. 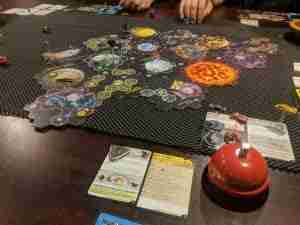 The last game night at The CG Realm I was talking to a local gamer named Chad and somewhere in that conversation, I mentioned that we had played Xia: Legends of a Drift System

At the mention of Xia Chad’s face lit up and he asked if I owned it and if I was willing to play again. So we set up a game night this past Saturday and we yet again explored the galaxy in Xia: Legends of a Drift System.

Saturday’s game was a four player game using everything I own. The Base Game

(as an NPC), Embers of a Forsaken Star

and Missions and Powers

. We played to fifteen Fame Points.

It was an epic game. It went about four an a half hours but that included having to explain the rules, and Xia is not a quick teach. Two of the players were new and two knew the game pretty well. By the end of the game, two of us were on level three ships and the other two were still on level two ships. We had put out all but eight sector tiles and somehow the Sellsword still wasn’t in play. We also only drew two warp gates and one of the merchant planets was still in the deck. 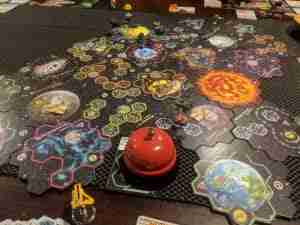 I’m still loving Xia. It’s such a great sandbox game. That was the thing Chad kept noting while he was playing: “You really can do whatever you want.”

In this last game, I was focused on exploration. Most of my fame came from grabbing exploration tokens and many of the sector tiles were placed by me as I kept trying to discover new things. Another player was making a ton of money selling things to Lolth, at least until the market crashed and there were no more goods to be bought on any planets. My friend Chris was trying to do the Merchant Marauder thing, which was going well for him, but he also got screwed over when the market crashed and never really recovered. Chad seemed to be all over the place trying out different things. He got most of his points by digging up relics on lost worlds. 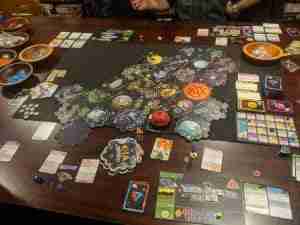 This play just reinforced my opinion that Embers of a Forsaken Star is a must have expansion for this game. There’s no way my exploration strategy would have paid off with the base rules. That market crash that changed up everyone’s strategy part way through the game comes from an event that’s in Embers. Having the Kiln in the centre of the galaxy was crucial for all of us at some point, after our ships took massive ice damage. Both the Kiln and ice damage are things the expansion added.

The only complaint Chad had by the end of the night was the fact that I had just convinced him to spend money on a copy of Xia and Embers of a Forsaken Star for himself.

That what hit my tabletop this week. What hit yours?