Due to the big Extra Life event last weekend, there wasn’t a lot of gaming going over the past few days. The only games I played this week are two new games from Ravensburger. Minecraft Builders & Biomes and Horrified.

I played both of these games with the Tabletop Bellhop team on the Monday after Extra Life, before Sean had to head home to Hamilton.

Disclosure: Some links in this post are affiliate links. Using these links doesn’t cost you anything extra and it helps support this blog and our podcast. As an Amazon Associate, I earn from qualifying purchases. Both games talked about this week were provided by Ravensburger for review purposes. No other compensation was provided.

A quick look at two new games from Ravensburger.

Last week was our big Extra Life charity gaming marathon. Extra Life is a huge deal here in Windsor. It’s our biggest gaming event of the year and always takes some time to recover from. This goes for volunteers like us as well as our venue, The CG Realm. Due to this, there was no public play gaming event this past week. The only gaming I’ve fit in since Extra Life was the day after when I played a couple of games with Deanna and Sean before Sean headed home to Hamilton.

Both of the games we played were new games from Ravensburger. Both of these games I also personally played during the Extra Lift event. Sean had played one of them with me over the weekend but both were new to Deanna. 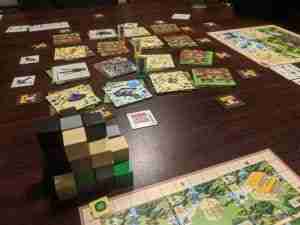 The first game we played that Monday was Minecraft Builders & Biomes

. This is a rather interesting game based on the popular Minecraft digital game. In it, players are mining resources in order to build various features and buildings onto their own personal 3×3 landscape grid. Resources are mined by picking individual bricks from a 4x4x4 cube of blocks made up at the start of the game. After each of the top three layers of this cubes is mined there is a scoring round.

Overall it’s a pretty simple to pick up game with easy to learn and teach mechanics but with some surprising depth due to how the scoring works. This game is all about planning ahead and building only buildings that work with what you already have. I enjoyed it much more than I thought I would.

Check out my full review of Minecraft Builders & Biomes if you want some more details, such as what you get in the box, how to play and some more of my thoughts. 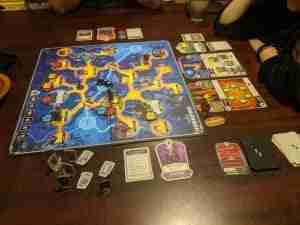 The second Ravensburger game we broke out was Horrified

. This is a cooperative game featuring the Universal Monsters, from Universal Studios. Classic monsters including Dracula, The Creature From the Black Lagoon, The Mummy, The Werewolf, The Invisible Man, and Frankenstein’s Monster and his Bride.

Previously I had played a game against Dracula and The Creature from the Black Lagoon so we made sure to set this game up with two new monsters. We chose The Mummy and The Invisible Man.

The big thing we noticed right away was how different the game felt having different monsters. Swapping up the monsters not only changes up the feel of the game but the mechanics. The game is all about collecting items and using them in some way. The collecting items part doesn’t change (except for maybe what items you may want more) but how you use them changes for each monster. For the Invisible Man we needed to gather items from specific places on the map and bring them to the police precinct. For the Mummy it was all about getting Yellow items and using them at the Museum to try to solve a sliding block puzzle.

I have to say that I’m very impressed by the variety I’ve seen in Horrified. Overall this game has proven to be a huge hit with pretty much everyone I’ve played it with. The only problem I’ve seen in this game, because it’s all open information, there can be a quarterbacking problem. Similar to games like Pandemic, it’s really easy for a strong personality to take over the game and tell every other player what they should be doing.

That’s it for my #WhatDidYouPlayMondays game list. Not a lot, but I’m still recovering from gaming for more than 24 hours at Extra Life. What games did you get in this week?