You are here: Home / On The Table / A Party, Gloomhaven, and Sagrada vs. Azul – Tabletop Gaming Weekly

Tonight may be one of my biggest gaming nights of the year with our Gaming in the New Years party, but that didn’t stop me from getting some games in during the week as well.

I continue to play Race for the Galaxy, 7 Wonders and Tokaido on Board Game Arena. Friday night Gloomhaven went well, I also got a copy of Sagrada that got to the table this past week. 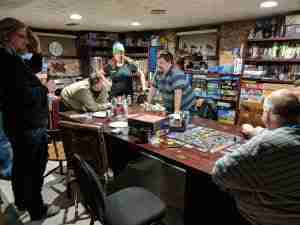 Before I get into this past weeks games I want to let you know about a party tonight. A party that you are invited to: Gaming in the New Year.

Every year I throw a big New Year’s Eve party with lots and lots of gaming (and Windsor Style Pizza). We’re going to be streaming the entire thing live tonight on Twitch and you should join us.

Check out this post for more into: Gaming In The New Year 2018 – You Are Invited!

I haven’t been playing as much Board Game Arena the last few weeks. Actually I’ve found trying to remember to log in once a day a bit of a chore. There’s just so much going on right now that sitting and playing board games at my PC, when there are so many other things I can and probably should be doing, seems like a bad use of my time. I’m also dealing with an eye injury that has limited my screen-time somewhat.

going that I’m enjoying. In 7 Wonders

I’m basically just going through the motions, picking cards without much thought. Tokaido

is similar, I’m not actually taking the time to watch what other players are doing and am making decisions too quickly to be competitive. As for Dice Forge

that I gave up on, for now. I really want to play the physical version at some point and will probably wait for that before I play again.

The one game I will never return to is Libertalia

. I really don’t think this game works on BGA. There’s a strong social element to this game and once that’s removed and the game becomes pure deduction I found I didn’t enjoy it at all. 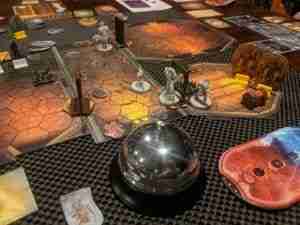 After our triumphant win last week this weeks mission felt a bit underwhelming. We moved back to the main plot and are playing one of the earlier missions. It started off rather tense in the first room but once we opened our first door the rest of the missions was a bit of a cakewalk. We had plenty of cards left at the end of the mission and actually had to spend a turn keeping a bad guy alive to snatch a treasure chest before the mission ended.

Now I know that sounds negative, but don’t get me wrong, we had fun. It’s nice to feel like a bad ass in that game, especially after having such a hard time with the last mission. This was also our first game that we won, easily at level 1. Due to me leveling up last game, our average party level is now higher than 2, so that means that a standard mission difficulty for us should be 2. Since we are playing on easy, that sets the scenario difficulty at level 1 for us now.

I have to admit there’s a temptation now to try a mission at level 2. We may just try that next time.

One thing that I think is worth noting. There seems to be a distinct difference in the difficulties of the main story missions the ones written by the game designer, and the bonus missions that were added as Kickstarter backer rewards. This is something I think players should be aware of. I’m not sure this is even a bad thing. Our feeling of accomplishment beating that side mission was very rewarding, as was the in game reward for finishing it. It’s just something we will be aware of in the future. If we have another easy game next week then maybe we will want the challenge of a side quest, or if we are getting frustrated with side quests it’s good to know the main plot is a bit easier.

Caveat: we aren’t that far in. I could be totally off on this and maybe what we experienced was a one off case. Based on what I read online when we were getting frustrated with The Windswept Highlands I don’t seem to be the only one with this theory. 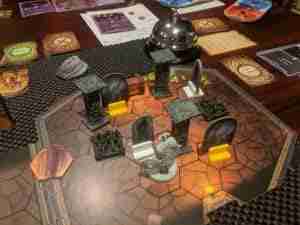 The thing I’m enjoying the most about the game now is the character development. Now that I’ve hit level three and completed quite a few personal goals during missions I’ve gotten to modify my character. I’m playing the Craigheart and over time I’ve developed a certain play-style for this character. Also I’ve developed a personality based on the choices we’ve had to make in city encounters and travel encounters as well as what I’ve had to do to complete those mission goals.

My Craigheart, Berk, doesn’t really get or understand money, or the parties fascination with collecting it when there are enemies around. He likes natural things, like stone, trees and dirt, more than beings. He has a strong and growing affinity with the earth and can now not only create but destroy using the element. Using nature against his enemies is his favourite tactic when he’s not sitting back hitting multiple enemies with ranged attacks. Why hit one enemy when you can hit many and if you can befuddle or immobilize them at the same time all the better. Building, changing and destroying battlefield obstacles is a point of personal joy. When he gets bored he breaks things, for the XP of course.

The final game that hit my table this past week is the dice drafting game Sagrada.

I first got to try Sagrada

back in March at Breakout Con in Toronto. Back then I found I enjoyed it quite a bit but didn’t feel the need to rush out and buy a copy. For one D was only lukewarm on it. Though part of that may have been due to a not so great con experience that day (something the con organizers handled very well).

I was pleased when I got a copy for Xmas from my mother in law. To me this is the perfect kind of gaming gift. A game you want, but not one you want enough to spend your own gaming budget on it.

Friday night after Gloomhaven I broke out my copy. Unboxed it in front of everyone, flipped through the rules, taught the game and started playing. As I talked about in my teaching games blog post, normally I don’t recommend doing this but since I had played the game before and I remembered that the rules were pretty simple to learn I thought I could get away with it. 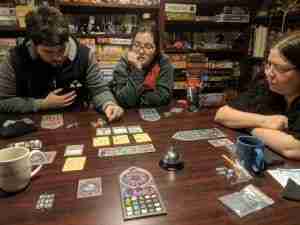 Sagrada is a dice drafting game that is somewhat similar to one of my all time favourite games Azul. The dice are standard D6 and come in five different colours. Each round you will be drafting two of them and putting them onto your player board. Your player board is a 4×5 grid representing a stained glass window and the dice are the pieces of glass. The number on the die represents the shade of the colour. The basic placement rules are that every die has to be adjacent to an existing die and no orthogonally adjacent dice can have the same colour or number.

Each game a set of cards are drawn to determine what will score points that game. There are a lot of these adding a ton of replayability. In addition each player gets a personal scoring goal which is based on collecting dice of one colour. Types of scoring cards include sets of diagonally adjacent dice of the same colour, columns containing all different colours, etc.

Each player also picks a stained glass pattern. They are given four to choose from and each has a difficulty rating from 3-6. The higher the difficulty the more tools the player can use during the game (more on those in a second). The patterns give you more dice placement rules. Making it so that certain numbers or certain colours have to go in certain spots.

So what about those tools? Each game three tool cards are drawn. These let players break the rules in some way. Re-roll dice, move dice, draft twice in a row, etc. Players can use a number of tools based on the pattern they picked with harder patterns giving more tool uses. The thing is that you get extra points for unused tools at the end so you only want to use them when needed.

The game is played over ten rounds with players drafting two dice at a time. If they play well, at the end of the game the players should have a full stained glass window in front of them. If they don’t they are going to lose some points for each open space on their board. All points in the game come from the scoring cards and are going to be different each game.

Overall I really dig Sagrada. Even D thought it was significantly better than she remembered it. The couple we played with were talking about picking up their own copy on the way out the door. It’s a very solid game.

It’s almost impossible to not compare Sagrada to Azul

. Both are about drafting things and putting them into a grid pattern on your individual player board and then scoring based on how well you placed your stuff. They are even thematically similar. I think they are very much in the same family of games and people who enjoy one will probably enjoy the other. 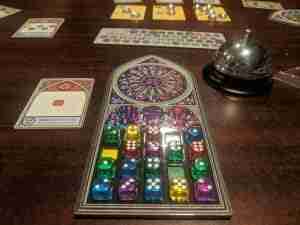 Personally, I feel Sagrada has more depth. It’s a bit harder to teach and it’s much more variable. Every game of Azul starts the same and ends the same and is scored the same. You are playing the same game over and over. In Sagrada, due to the fact that the scoring cards (both personal and public) are randomized, the boards are randomized and the tools are randomized, it’s unlikely that two games will ever be the exact same.

The placement rules in Sagrada are also much more unforgiving. There is a lot more brain burn trying to figure out what to draft in Sagrada. Trying to find the perfect die that not only helps your personal goal but also scores on multiple public scoring tracks while not making it so that you can’t play a die later due to a pattern restriction is the kind of thing you will be doing every round. Because of this Sagrada can be significantly longer than Azul due to AP (Analysis Paralysis).

I think there’s room for both games. Azul is still going to be my go to, pick up and play almost anywhere with anyone game. Sagrada I expect will see a lot of play, but at my house where I’m not going to lose one of the 90 dice that come with the game. I expect for a while Sagrada is going to be my “so you like Azul, check this out” game. I can see going to public events and finding all the people I taught Azul in the last year and having them try this “new” game out.

That was my week. Now time to clean the game room for that party tonight. 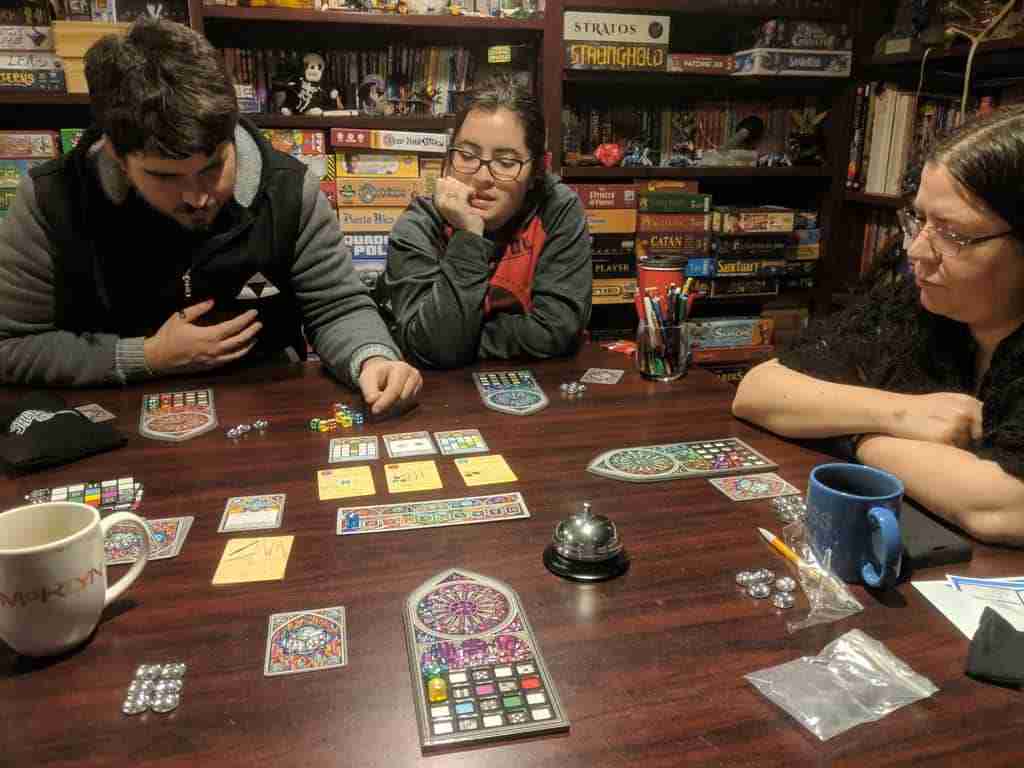 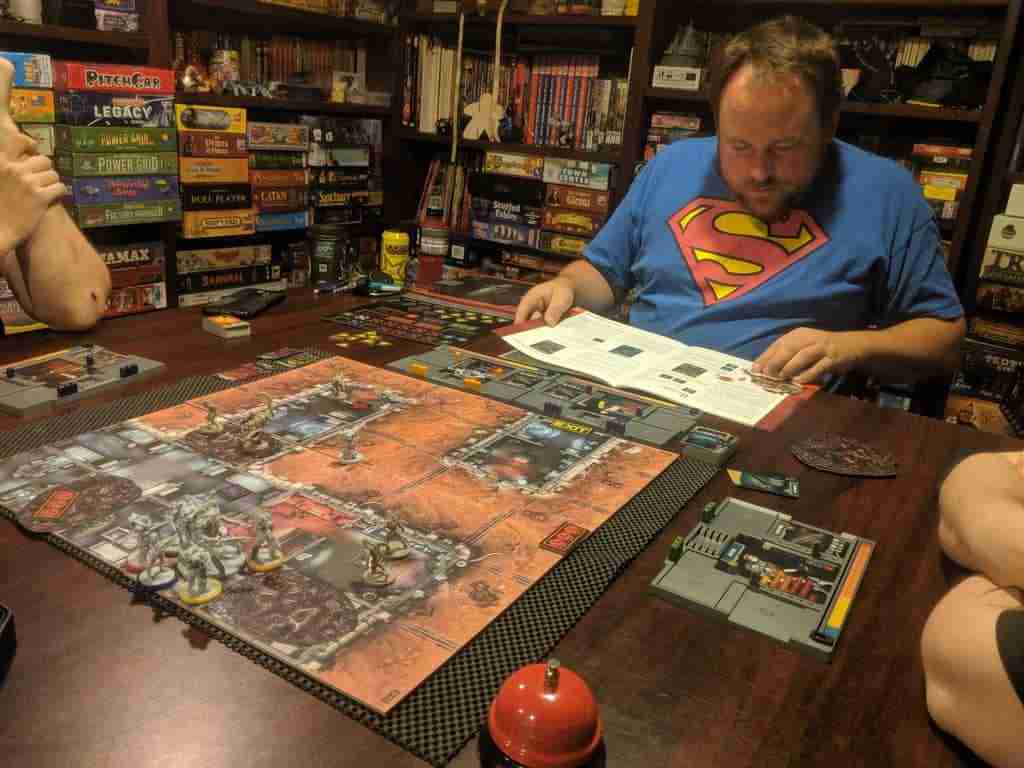 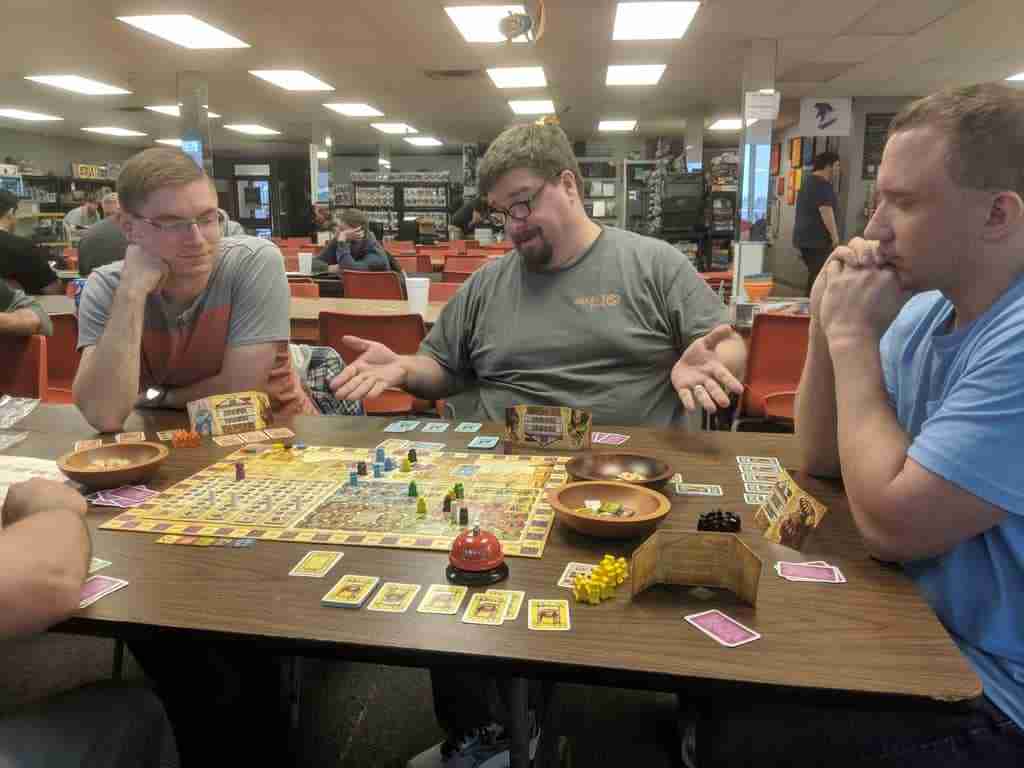 A Look at Strasbourg and Gugong, and a Return to Terraforming Mars and Railroad Ink – Tabletop Gaming Weekly 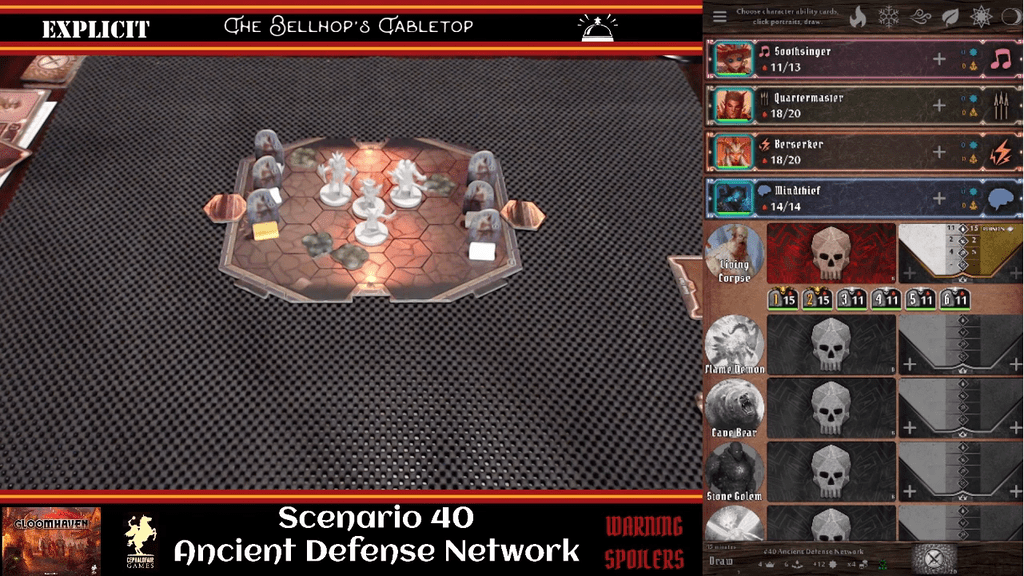