Today I’m returning to two of the hot board games I got at Origins 2019.  First I’ve got a look at Dead Man’s Cabal from Pandasaurus Games. Then I return to the hybrid board game/card game Sorcerer from White Wizard Games.

What I think will be of interest with these new plays of these games is that I tried each of them at new player counts. So read on to check out my evolving thoughts on these hot new games.

Disclosure: Some links in this post are affiliate links. Using these links costs you nothing extra and we earn a small amount from qualifying purchases, which helps to keep this blog and podcast going. Some games mentioned in this post were provided to me by publishers for review purposes.

A second play and more thoughts on Dead Man’s Cabal 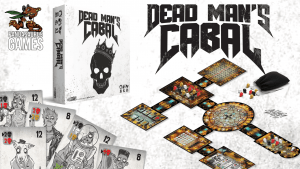 Last Monday Sean Hamilton (not to be confused with my podcast co-host, Sean from Hamilton) was over and I got Dead Man’s Cabal

to the table for a second time. I had played Dead Man’s Cabal once before at one of our EZY mode game nights. I enjoyed that first play and I had been looking forward to playing it again.

One big difference with this game was that it was a three-player game between Sean, Deanna and I. While my previous play was at the maximum four players. There are some changes made when you play with less than the full player count. All of this just involves there being fewer things in play. You put fewer skulls on the Sepulchre and fewer runes in the Scriptorium. Other than that gameplay is identical. 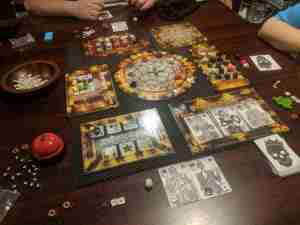 The game played great with three players. I would say as well if not slightly better than with four players. Having fewer skulls available to draft seemed to make the biggest differences as we were much more limited in our options each turn. I’m still really digging the action selection mechanic in Dead Man’s Cabal and found that I really liked the whole Private Action followed by a Public Action mechanic. At first, it reminded me of the “I Lead You Follow” style mechanics from games like Race for the Galaxy

, but this is actually quite different.

I found that it really helped that I had played the game before. For one, teaching the game went much better, but that’s expected. More importantly, I was able to properly convey how important the Oracle board is and how much final scoring impacts the actual winner of the game.

I talked a bit about this during my first thoughts, but the Oracle board is how most of the end game points are awarded, and it’s unique in that it is its own small area majority mini-game. By using the proper runes when raising the dead, players get to place their cubes on the oracle board. Each spot on the board is an end game scoring system. The player who has the most cubes on a spot is going to get the maximum points for that thing. Then the player with the second most cubes is going to get half as many points for that thing. Any other players on that spot get nothing. This is a huge part of the game and it’s not really obvious how important it is when you are playing for the first time.

Both Deanna and Sean had not played before and both liked it. Deanna was actually surprised by how much she did enjoy it. She had taken a look at the game at Origins 2019 and watched a demo game, but hadn’t actually played. She noted that there’s more to the game than it first appears. I’m looking forward to a few more plays and then you can expect to find a full review here on the blog. Assuming we don’t have some kind of terrible crash and burn experience, I expect that to be a pretty positive review. 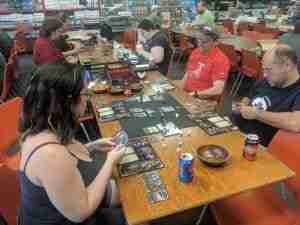 This past Saturday I ran a Sorcerer

demo night at The CG Realm, a Windsor FLGS (Friendly Local Game Store). This was part of their usual tabletop game night where they usually feature one game and one of the staff has a copy available to demo.

After trying Sorcerer at Origins and bringing home a review copy I was excited to show the game off, so I agreed to take over the demo duties for the night and teach this excellent card game. In addition to my copy, local gamer Steve S. also brought his shiny Kickstarter copy with him and was cool enough to run a second table, so we had two games of Sorcerer going simultaneously through the night. I personally ran two demo games.

When I first set the game up and planned the night I was expecting to do short two-player demos. Showing off the features and mechanics of the game and that’s it. The local gamers were having none of that. Everyone really wanted to see the full game experience. The problem was that we had too many people for that to work with only two players playing so I figured why not check out the four-player rules. 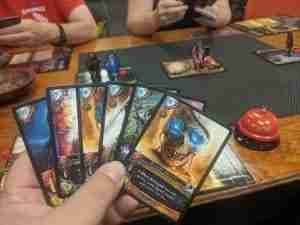 Now I know the game is supposed to be best with two players. Board Game Geek has it listed as best with two. The rules are written for two players with some variant rules for three or more players. Even Rob from White Wizard Games noted that it was designed to be best as a two-player experience. I made sure to make this clear to everyone playing since we would be playing with more than the recommended players.

I decided to use the team rules for our four-player game, and I have to say it played surprisingly well. Well enough that I’m actually surprised at how much people seem to be insisting that Sorcerer is really a two-player experience. When playing with four players you set up the game like a normal two-player game. You are still battling over three locations and the winner is the side that destroys two of them before the other team. Turn order is a bit strange. Turns swap between the two teams, just like in a two-player game. The player that gets to act has to be the player with the most actions left, and if there is a tie the team decides who gets to go.

We found that unique turn order mechanic to actually be a highlight of the game. There were some really interesting tactical moments where it made more sense to let one team member go before another, or have one team member delay so that the other player could react to what the opposing team is doing. This actually came up multiple times during both of the games I ran. 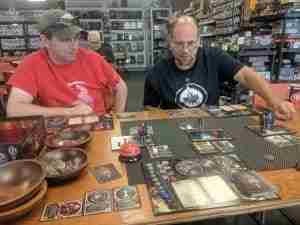 The other big change with teams is that you can have six minions battling at each location instead of four. This didn’t really seem to have a lot of impact, though we did fill most of the zones by mid-game. It didn’t really feel any different from having full zones with two players, though it did make any card that affected all minions in a zone somewhat more powerful.

Steve’s demo games also featured four players and by the end of the night, both of us agreed we couldn’t find a good reason not to recommend Sorcerer with either two or four players, despite what people may be saying on BGG.

So that was my #WhatDidYouPlayMondays week in review, a couple of games tried at new player counts. What did you get to the table this week? Did you learn anything new about any of your games? Let us know in the comments!