Today I played a kids game with the whole family, Stuffed Fables.

This was our first time playing this very cool adventure game from Plaid Hat Games and in this post, I will be sharing my initial thoughts on the game.

A bit of background featuring another Plaid Hat game, Mice and Mystics 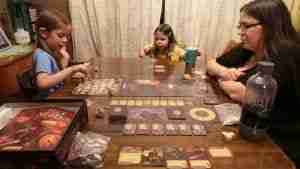 , an adventure game from Plaid Hat Games. In Mice & Mystics you play through a storybook where, in a fantasy realm, the characters have been turned into mice. The game is a cooperative tactical dungeon crawl style game with a big focus on the story. A story that my kids really loved.

The problem is that the game wasn’t really that simple. While the theme is great for a family game I would say the actual mechanics are more geared towards adults or at least teenage gamers. They were especially hard to grasp for my youngest. While we had fun the few times we did try the game, it was mostly my wife and I taking turns for the kids and just having them roll the dice.

In the end, we decided to put the game away until the kids were older. In the years since I’ve considered giving it another try again but have still been putting it off. Then last year the internet and podcasts exploded with buzz about a new Plaid Hat Adventure game: Stuffed Fables. 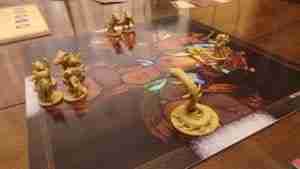 has an even more kid-friendly theme: you are playing stuffed animals who are trying to protect their sleeping girl from the monsters under the bed. Online reviews and podcasts all indicated that the rules were much simpler, streamlined and more kid-friendly. Everyone was saying that this was an even better family game than Mice and Mystics. I picked up a copy for my girls and gave it to them this past Xmas.

We finally got the game to the table earlier today.

A look at Stuffed Fables after one play, three “pages” into Book 1 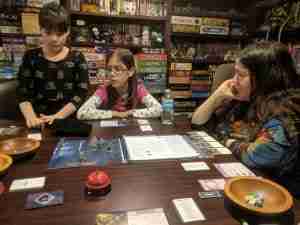 Right from the start, I’ve got to say that Stuffed Fables

impressed me the moment I took the lid off the box. There was only cardboard sheet of punch outs and a fairly thin rulebook on top but under that is this beautiful spiral bound book with very thick pages. Under that are some cards, a pile of D6s in seven different colours and some really amazing looking miniatures. Everything just screams quality. If you get a moment check out my unboxing video of Stuffed Fables and you can see for yourself.

The rulebook is not too thick and is very clear. As a nice bonus, the storybook (the bigger book) actually has QR codes in it that all link to Watch it Played videos with Rodney Smith teaching each rule section. I watched the full Watch it Played video today before playing and it’s one of the better ones I’ve seen from Rodney.

That big storybook isn’t just a bunch of fiction to be read, it’s also the game board. I thought this was particularly brilliant, being both functional and very thematic for this style of story game. There is one problem though, when you’ve got a big table like mine (8×4) it can be rather hard for everyone to reach the board/book and even harder to find a way for everyone to reach it and have people be able to read from it. This is one of the few games where I think I would rather play at my dining room table rather than my game table. 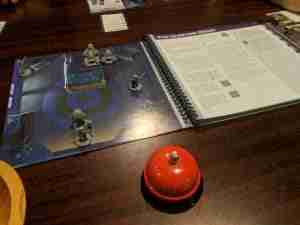 When you start the game each player picks one of the “stuffies” to play. Each stuffy starts with five stuffing which are the hit points in this game. Then you pick one of the stories to play through. We started with The Big Girl Bed: Story One, as recommended in the rules. This opening story walks you through the rest of the setup process and slowly introduces game elements in an easy to learn fashion. As you read through the book it will tell you to turn to different pages and on each page, you may get told to read different sections after making player choices in a which-way book fashion.

Eventually, you will turn to a page with a board on the opposite side and it will tell you how to set up your miniatures and how to spawn any baddies or other set up rules. Along with spawn points, maps may also include trigger points where you will need to read new sections of the storybook, encounter locations where you can find and interact with lost toys, search targets which let you look for useful items and equipment and shopping spots where stuffies can spend buttons they earn from defeating enemies.

Each story page will have a goal and that goal will usually lead you to another page in the book. At some point, I assume you get to the end of the book you are playing. We got three pages deep and had to call it a night as it was getting close to dinner time. 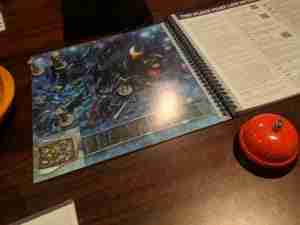 That was one big surprise from this game. I was expecting something much shorter. We played for two hours and didn’t even finish the first story. I didn’t want to spoil anything by looking ahead, so I’m not sure how much longer we would have needed to play to get to the end. As it is we left the game set up but you can “save” your game by noting down what cards each character has, how much stuffing they each have and how many sleep cards have been revealed.

As for mechanics, Stuffed Fables uses pulling dice from a bag randomly as the main mechanic. Each turn players draw 5 dice from a bag filled with dice in all seven colours. Depending on the dice drawn different things happen. White dice let stuffies try to find more stuffing. Black dice represent threat and when enough are drawn the baddies get to go or other story based events can happen. The other coloured dice represent different actions. Red is for melee attacks, yellow for perception and searching and so on. Purple dice are wild cards and can be spent as any of the other ability dice types. Most actions require the player to roll one or more dice and then compare the total to a target. For movement the total just means you get to move that many squares. Targets include baddie toughness, or story assigned difficulties like needing a five or more on a red die to pull a waggon out of a pile of toys. 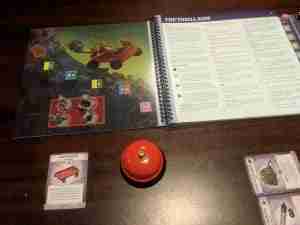 There’s quite a bit more to it, like using dice to help other characters and saving dice for defence, but that’s the overall basic system. Movement is based on a square grid and diagonal movement is valid. Some squares on the map are separated by coloured lines and require a die of that type to be used to move over them, but in general, any die can be used to move. With the small size of the storybook which serves as the board, the maps are surprisingly tight, not requiring much movement.

Overall it’s a very intuitive system. The neat bit is that whenever you have more than one of a die you have a choice. You can roll them all together for a higher total or roll them separately getting multiple actions. This leads to some interesting decisions. Most importantly this system was simple enough that both my girls (9 and 11) had no problem figuring out how it works.

The best part, to me, so far has been the variety of actions that we have had to do in the story. The first mission was what I expected, beat up some bad guys, but from then on it’s been about a lot more than just combat. Actually if we hadn’t wasted some time on the second section of the story that first combat would have been the only one we saw during our two hours of play.  This is a distinct change in focus over what we saw in Mice and Mystics and a very welcome change.

My initial thoughts on Stuffed Fables 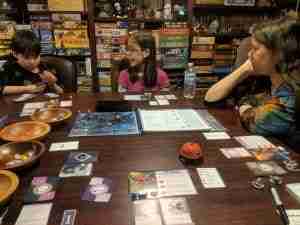 The four of us had a great time playing Stuffed Fables this afternoon. While it took a bit of time to convey the rules to the kids, the dice based system in this game is much easier for kids (and adults) to grok than Mice & Mystics or any other adventure style game that I’ve played. Turns are quick which is great for keeping the kids involved. What impressed me even more was the variety of things that we have had to do in the game so far. I expected more of a dungeon crawl with lots of baddies to fight and, except for the initial encounter, that doesn’t seem to be the story that is being told by Stuffed Fables, and that’s awesome.

My only complaint so far is the game length. I had no clue that playing through one story was going to encompass multiple pages and boards from the storybook. It thought it was more of a one page encounter kind of thing and that’s not the case. At this point, after two hours of play, we haven’t seen the end of the first story. Now there is a way to quit and come back but it requires taking lots of notes.

So far length is my only concern with this game. Trying to keep kids focused long enough to finish a full book may be an issue depending on your kids. Other than that, at this point, I’ve got nothing but praise for Stuffed Fables. Not that I expected them to be wrong, but everyone was right, this is a better family adventure game than Mice & Mystics. Though I do plan on trying that one out again at some point, but definitely not until we finish Stuffed Fables.

Not a very busy #WhatDidYouPlayMondays report for me this week. How about you? I hope you got in more gaming than I did. Let me know in the comments below! 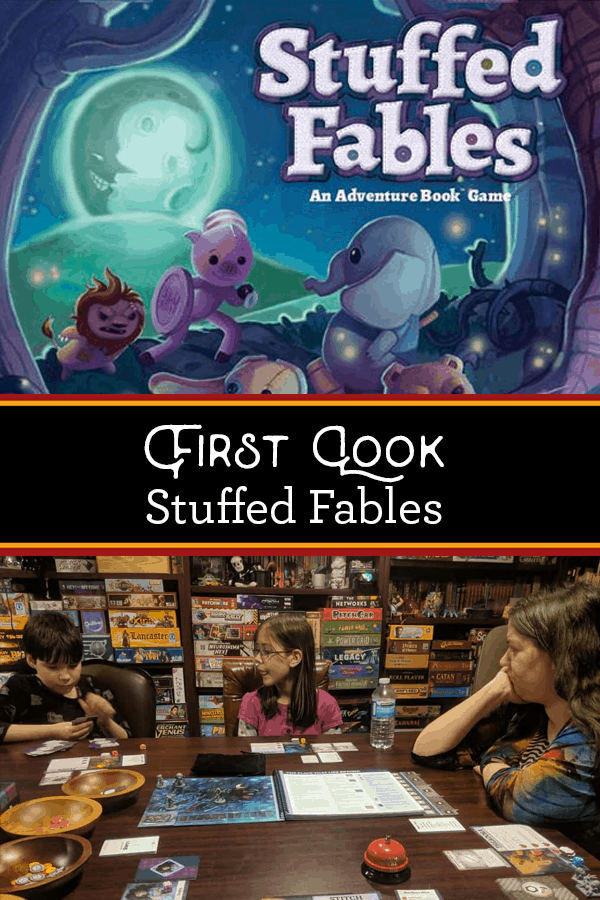