This past week I got in one play each of Vinhos Deluxe Edition and Gold West. A couple of games I brought home from Origins.

Disclosure: Some links in this post are affiliate links. Using these links doesn’t cost you anything extra and it helps support this blog and our podcast. As an Amazon Associate, I earn from qualifying purchases.

Last night Deanna and I tried Gold West and Vinhos with two players.

It’s almost November and I still haven’t played all of the games I brought back from Origins.  Due to this, I’m trying to step up my new to me game plays. I started on that last night playing two new to me games with Deanna. 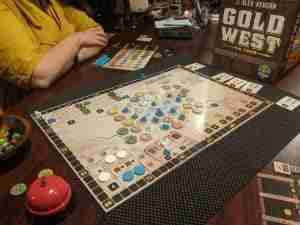 Up first was Gold West from Tasty Minstrel Games

. This is a really solid short abstract game with an old west, gold rush theme. It’s got some really top notch components for an abstract game, with some of the thickest cardboard I’ve ever seen in a game. The chits, in particular, are a joy to manipulate. So easy to pick up.

The game uses a mancala based mechanic where you have four bins of goods, you pick one of them and take all the goods out of it, you then have to drop one good in each bin above the one you chose until you end up with a pile of leftovers off the top of your player board. These leftovers determine what actions you can take. Metals (copper, silver and gold) are used to fulfil investments, gain influence in the town or to move your stagecoach along one of the three shipping tracks (one for each type of metal). Wood and Stone are used to build camps and settlements.

There’s a bit of a point salad thing going on here, as you are going to get points for how far you are along the shipping route, along with bonus points for the first player to hit landmarks on the routes. You also get points for fulfilling investment orders, again with a bonus for players who do this early in the game. Adding influence to the town leads to end game scoring with the options being randomly generated each game. Then there’s area majority points for the four different terrain types and there are also points for your longest chain of camps and settlements.

What surprised me the most about Gold West was how quick it was. This was our first game, a learning game where I had to teach Deanna how to play, and our game was still over and done in under an hour. This game might just fall into the thinky-filler category, though I expect it will be longer with more players. The game played pretty well at two players but that’s never a great number for anything with majority scoring. I expect it will be even better with three or four. 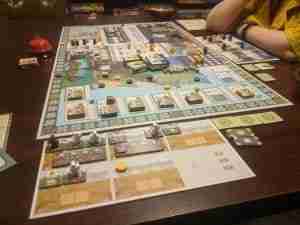 The other game we played was Vinhos Deluxe Edition from Tasty Minstrel Games. This is a big game, both in actual physical size as well as weight and complexity. This new version of Vinhos comes with two ways to play and we tried out the 2016 Vintage edition which is the lighter and more accessible version of the game.

Lighter here does not mean light. Vinhos is a meaty game with a lot going on. Vinhos Deluxe Edition is a heavy economic game about the business of winemaking. You are buying vineyards form the various wine regions in Portugal and then selling the wine locally, exporting it overseas and entering your best batches into wine tasting fairs. In addition to managing your money, you also have to watch out for the weather and the fickle tastes of the wine fair judges.

I took some time earlier today to write up a more detailed look at Vinhos Deluxe Edition. In that, I got into a lot more detail about the gameplay and how the game works as well as talk a bit about the amazing production quality of this game. What I will say here is that both Deanna and I really enjoyed our play of Vinhos. This is a great heavy game that isn’t too heavy. It’s tight and unforgiving, without being punishing.

I’m really looking forward to playing more Vinhos and trying it at other player counts.

A Halloween Themed Game Night at The CG Realm.

The advantage of having just hosted a Halloween game night at EZY Mode is that I didn’t have to pick out or pack any games for the game night this past Saturday at The CG Realm. I just left everything in the box from last weekend.

Despite bringing a small pile of games, most of the games that got played Saturday were the same ones that I played the week previously.

. This was the official demo game of the night and we had two copies at the store to show off. We played a four-player game. Three of the players already knew the rules and the fourth had read the rules but never actually played. 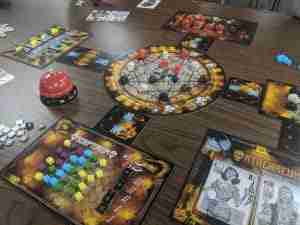 The game went rather well. With everyone knowing the rules the game was closer than most games of Dead Man’s Cabal that I’ve played. The hardest part to figure out about this game is the Oracle board and final scoring which is driven from that board. No matter how much I stress the importance of this board, new players never give it enough focus. Points from the Oracle board will usually account for about 50% to 75% of your score at the end of the game.

Up next, I broke out Monster Factory

. I wanted something quick and light to kill some time to see if any more people were going to show up. Sadly the weather here in Windsor was terrible on Saturday and that really hurt our attendance. Even I was leery of bringing my games out in the rain.

This went as well as it did when we played Monster Factory at EZY Mode. Everyone really enjoyed it. The irony here is that we had some of the biggest heavy game fans in Windsor playing this silly kids’ game. One thing I’ve noticed with Monster Factory is that it’s a very different game when played with gamers vs. playing with kids. Gamers play much more cutthroat. I think people placed more tiles on other people’s monsters than they did on their own.

After Monster Factory, I stuck with the kids’ game theme and broke out Ghost Fightin’ Treasure Hunters

. Having just sold these hardcore gamers on Monster Factory, they were more than willing to try another kids’ game. I was also pleased to get to play this with a local gamer, Nick, who I’ve not personally gamed with before. Playing with someone new is always something I enjoy. 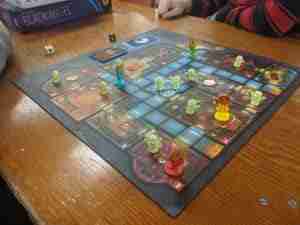 Ghost Fightin’ Treasure Hunters was as tense and enjoyable as ever. We played two games and lost both, despite our first game using the easy rules. Having now played the advanced rules a few more times, I’ve decided I really like them. There is more shuffling going on, which makes the hauntings less predictable and the locked doors really add a significant level of tension to the game. I think the next time I introduce this one to gamers I’m going to skip right to the advanced rules.

with a slightly different mix of players. This game included Nick, who had not played it before. Nick os a seasoned gamer and picked up on most of the concepts well. The problem was, as I hinted at earlier, the Oracle. Nick didn’t spend nearly enough focus on the Oracle and his final score really suffered for it.

I hate to say it, but my overall impression of Dead Man’s Cabal is getting worse. I absolutely love the theme. The components quality is also fantastic. The gameplay itself is solid and I really dig the action selection mechanism. The problem is that end game scoring. There’s just too much relying on where you spend your cubes on the oracle board. None of the games I’ve played of Dead Man’s Cabal have really been close. Each player’s score is drastically different from the others, with the separation between first and last often being over one hundred points.

I still like the game and I would be willing to play it if someone asked to play, I just can’t see suggesting it that often going forward.

A decent week of gaming if I do say so myself. How about you? How did things go on your tabletop this week?