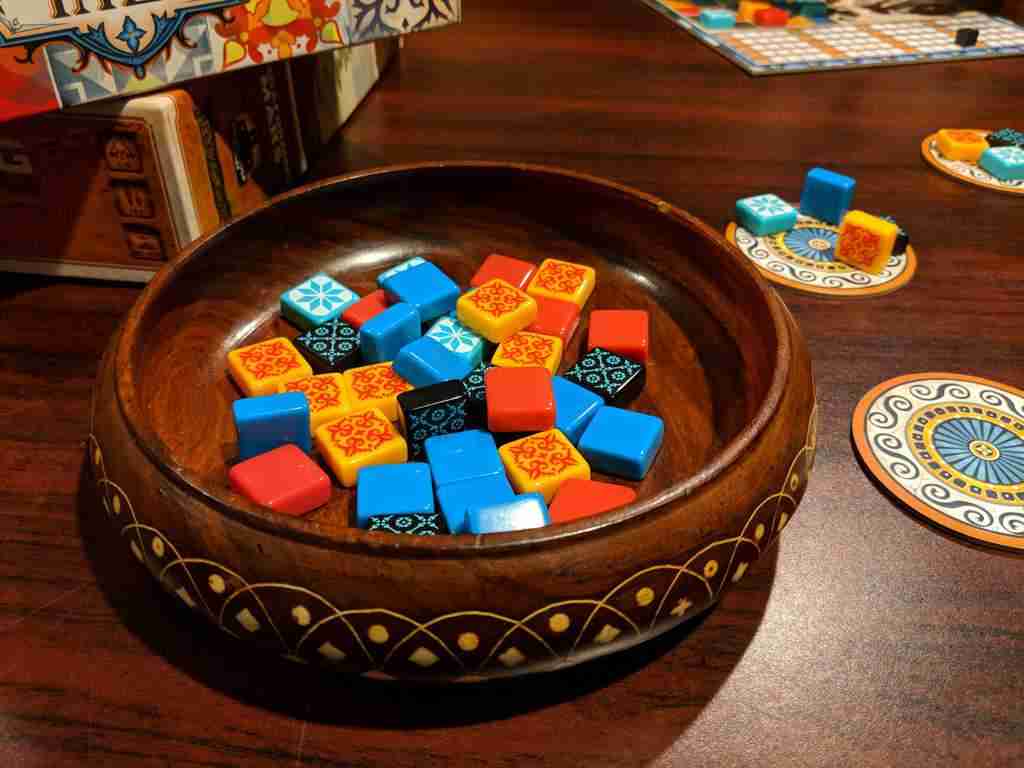 Tabletop Gaming weekly is inspired by Chris Cormier’s #WhatDidYouPlayMondays. Each week I will be talking about what games I got in, gaming events I hosted or attended and anything else cool that happened over the last week.

This past week saw lots and lots of Terraforming Mars and another teaching game of Azul.

Disclosure: Links in this post are Amazon Affiliate links. As an Amazon Associate, I earn from qualifying purchases. 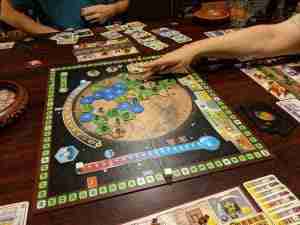 I’ve got a long-standing Monday night game group. We originally started gathering on Tuesday’s to play Dungeons & Dragons 4th Edition. Over time people came and went, the game changed from D&D to Warhammer 3rd Edition and the night moved from Tuesday to Mondays. While meant to be an RPG group, often everyone can’t make it out so we end up playing board games. Over the last couple of years this has become more and more common and at this point, I would say we are a board game group that sometimes plays RPGs.

I loved drafting in Terraforming Mars. This is the rule that finally completes the game. It makes some of the more difficult to play corporations much more viable. It makes it so that picking and sticking to a strategy is much easier and more valid. It also greatly increases the player interaction and the backstabbing. Overall I love it. Drafting should be the default way to play. As for the new map, that I wasn’t as big a fan of. I’m not sure exactly why. We tried the Hellas map the previous week and I really enjoyed it, for some reason Elysium just didn’t feel quite as good. I do still like the way it changes the game just a bit. It doesn’t mess with the core rules or the way the game has played, but it changes up the strategies the players use in order to win. 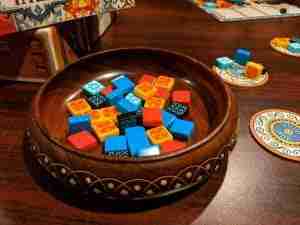 After finishing up our game of Terraforming mars my wife asked to play a round of Azul, so I broke that one out. I’ve got to admit I’m starting to get a bit Azul’ed out. I feel I’ve hit a plateau in that game as far as strategy is concerned. I tend to score about the same number of points and never seem to win anymore. I did still enjoy this play but I think a big part of that was that our third player, Tom, had never played before and really enjoyed it.

My next chance to game came Saturday afternoon at The CG Realm. We run a monthly game night there the second Saturday of every month. The event is mainly just free open gaming. The store will often pick one game to be the featured game and the owners will put on demos of that game through the night. The store stays open late and the attached Windsor Sandwich Shop continues to sell food until 7 or 8pm depending on how many people come out. 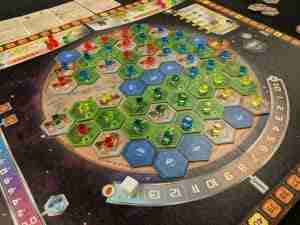 I brought a few things to play and really wanted to get Zhanguo to the table, but that wasn’t meant to be. Instead, I ended up breaking out Terraforming Mars yet again. This was due to popular request. That’s one thing about organizing a game night, often you have to go with what the crowd wants.

Since this game would include some players with little to no experience we went with a corporate wars game with no drafting using the standard board. I was very tempted to add in drafting having finally tried those rules out, but the one thing I learned Monday was that it significantly adds time to the game. Not great for a game at a public venue.

We all had a great time playing this game. For the first time ever we completely filled the board. I’ve never seen so many tiles on the board, nor so many points scored at the end of the game. This, to me, just reinforced how good this game is. Every game plays so differently, even though you are using the same deck of cards over and over again. 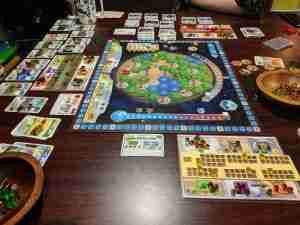 Our game of Terraforming Mars went over so well, we planned a follow-up game back at my place after the FLGS closed. This time I went back to the Hellas map and we pulled out the drafting rules again. Having now played both Hellas and Elysium in the same week I can definitely say I prefer the Hellas map.  This game of Terraforming Mars was our closest game ever. Three experienced players, full corporate wars rules, with drafting and we ended 112 to 111 to 111. I was one of the two tied for second (officially I came in last with the tiebreaker rules).

So it’s been a very Terraforming Mars filled week. This is not a bad thing. I noted above that I’m getting a bit burnt out on Azul. Not so with Terraforming Mars. At this point, based on the number of plays I’ve had of Terraforming Mars and the amount I’m still enjoying the game I really think I need to start calling it my favourite game.  Sorry Wallenstein/Shogun you have been usurped.

So that was my week in gaming. What did you get to the table last week?