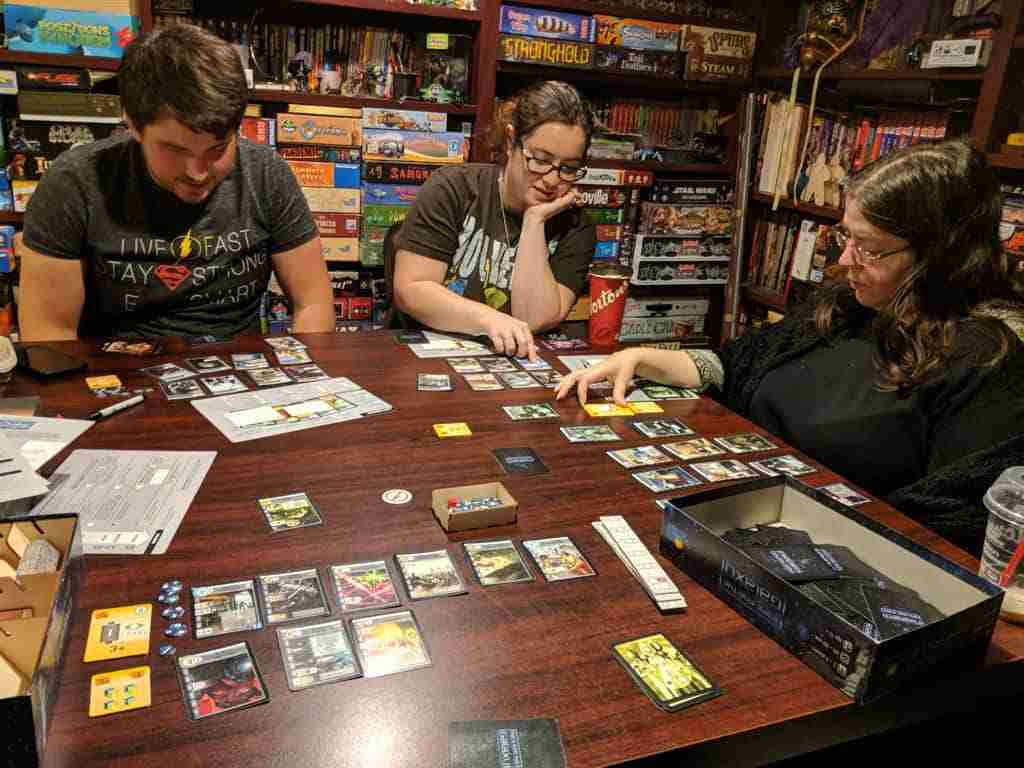 Tabletop Gaming weekly is inspired by Chris Cormier’s #WhatDidYouPlayMondays, which he started over on his blog Geeky Goodies way back in 2014. Every Monday, gamers from all over the web hit up social media and share lists of what they played the previous week.

Disclosure: Links in this post are Amazon Affiliate links. As an Amazon Associate, I earn from qualifying purchases.

It has been an interesting week, and by interesting I mean busy and by busy I mean little time for gaming. The only night we got some gaming in was Friday night. Normally Friday nights are Pandemic Legacy night. Another couple comes over and the four of us work to save the world. That was something that started up this year and we are nearing the end of season one. My wife wasn’t feeling up to Pandemic though so we decided to play something else. My wife also wasn’t up for learning anything new so we pulled out a classic and a current favourite. 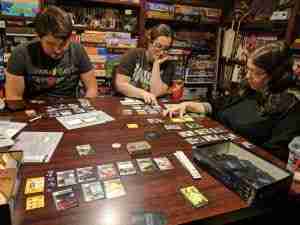 The classic was Race For The Galaxy. I’m a huge fan of Race and we used to play it a lot. It used to be a regular at the local gaming events I hosted, but that was a while ago. It ends up I hadn’t played my physical copy of Race for the Galaxy since 2014 (I did play the App on Steam a few times in 2017). Needless to say, I was a bit rusty on the rules. I remembered the base game well enough but my set has the first three expansions included and mixed in. It took a bit for me to review the various expansion rules and then decide to toss most of them out for our first game.

Game one was the first play of Race for the Galaxy for the other couple. They own and have played Roll for the Galaxy but never Race. So they were familiar with the concepts and some of the iconography and that helped. I kept all the cards from all the expansions in as even cards that are designed for things like capture have other abilities and can always be used as money. The only expansion rule I used was the drafting variant for homeworlds and starting cards. Not the one where you draft your own deck but the one where you get one red planet, one blue planet and pick four of six cards for your starting hand.

We all had a great time. There’s a reason this game used to be a game night staple for us and it was great to get it back to the table again. Everyone had such a good time that we decided to play a second time. For the second game, I tossed in a few more of the expansion rules. I was tempted to toss in the whole capturing thing but decided against it after realizing that it was more fiddly than I remembered. Instead, we just used the First and Most goals.

The second game went as well if not better than the first. Both games combined re-kindled my love for this now-classic card game. I think the next Saturday game night at one of the local game stores I’ll bring Race for the Galaxy out of hiding.

One of the nice things about Race for the Galaxy is that it’s got a lot of depth for a game that’s not that long. I think both games combined took us maybe 2.5 hours. It’s great to get such a good experience in such a short amount of time. This also meant that when we finished the last game we still had time for one more game.

At first, we considered Roll for the Galaxy, but after realizing that I’m rustier on the rules than I remembered (especially the expansion rules), we decided to grab my wife’s new favourite game, Terraforming Mars. 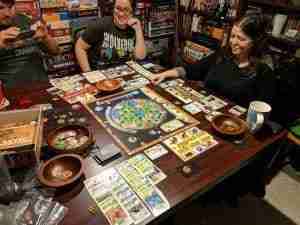 Our Friday night gaming friends had both played Terraforming Mars only once, using the basic rules and beginner corporations. Due to this, we went with just the standard map, the corporate wars rules and no drafting. This way we kept the game “simple” but still moved up to the next step for our guests.

Terraforming Mars was fantastic as usual. We’ve now played this one more than 10 times (which is a lot for any newer game, for me), and I’m always surprised by how different the game can be each time we play. We use the same map and same cards yet the emergent gameplay changes every single time. I’ve never played a game of Terraforming Mars where there were so many tiles on Mars and so many cities in play. We had 15 cities on the board by the end of the game and it was at the point that players would have built more but there were no more legal spots left. The other unique part about this game was the fact that the lakes were the last things to be terraformed. I’ve never had that happen before. All four of us really enjoyed the game and by the time we were saying goodnight at the end of the night I had to laugh when our guests were saying to each other: “We’ve got to buy this game. It would be great for the cottage.”

So that was my week in gaming. What games did you play last week?