Check back here every Monday where I will be taking a look back at the previous week. Board games played, gaming events hosted or attended, and any other tabletop news.

Compared to last week it was a slower week. I managed to get Mansions of Madness, the app-integrated second edition, off of my pile of shame. I’ve got a couple regular tables going at Board Game Arena that have been featuring 7 Wonders and Race for the Galaxy. Playing Race on BGA inspired me to bring it to the FLGS and play my physical copy. Also at the FLGS I finally got to try Gaia Project. So not as many different games as last week but I’m happy with what got played.

Monday night it looked like we were going to have exactly five players. I really wanted to get something off my pile of shame, so browsed through my unplayed games and spotted Mansions of Madness second edition 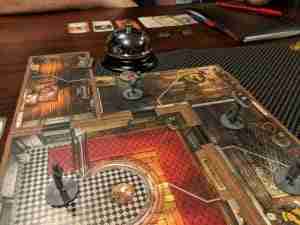 I owned Mansions of Madness First Edition and had mixed feelings about it. It was a very neat game and rather different from other games in my collection (which is always a bonus). The problem was that it was fiddly and fiddly in an odd way. The original game is a one vs. many game, where one player is the Keeper and everyone else is working together to defeat the Keeper. I generally enjoy these kinds of games. The problem with Mansions first edition wasn’t the player sides but rather the detailed and involved set up phase that the Keeper had to go through before you could play the game.

Besides taking up quite a bit of time, time where the other players basically sit and do nothing, much of the information is meant to be hidden. So the best way to do this set up is when the players aren’t in the room. Which is great if you can plan ahead and the Keeper can have the game set up before everyone gets there, but that’s not always feasible, especially if you aren’t playing at the Keeper’s house. The other big problem is that if the Keeper messes up this set up in any way, by putting cards in the wrong order, or a token in the wrong spot, it will (note will, not can) ruin the entire game. Now the original game is not a short game. We’re talking 2-3 hours for your first few plays. So, to play for 2 hours just to find out the Keeper had a clue in the wrong spot is devastating.

So, yeah, not a huge fan of the original game. I only picked up the second edition due to a liquidation sale at a local game cafe that didn’t quite make it. That and the fact that reviews for this new edition were very positive. The biggest part of that buzz was the fact that an app now replaced a Keeper, so no more waiting for the Keeper to set up and no chance of anyone setting things up wrong.

As I mentioned in my Tech at the Table article, I’m not completely sold on app integrated board games. Part of this is just me being a grumpy old gamer, but another part is the fact that tech changes so fast I worry that support for these apps may suddenly vanish. Will I still be able to play Mansions of Madness ten years from now? My guess is probably, but who knows. All I can do is let you know my thoughts on how it works now with the app fully supported.

By the time we sat down to play, we only had four players. Sadly we lost one due to a last minute cancellation. I probably could have grabbed another game, but I had already spent the afternoon punching, reading and downloading the app on both a tablet and my phone. At this point I had it out and ready to go, so we played four players.

The game was solid. The app does a lot to add atmosphere to the game. This comes from the mission intro which is read out loud, background ambiance while you play and sound effects when certain events are triggered. In addition, there are some puzzles that you have to complete on your device, which I can’t see working nearly as well as with physical components.

One of the things I really liked is how the app randomized things. Every time you attack a monster, or roll a horror check, or try to evade a creature, the app randomizes exactly what happens. Which means that just because you are attacking, you aren’t always going to be testing Strength. This made it so that all of the stats were important, which was cool to see.  Another thing I really liked about using the app is that none of us had any idea what our actual mission was. This was done very well. We knew we were investigating a house, but had no idea when we started what our win condition was.

Overall I was very impressed. I enjoyed it more than I thought I would and found that it was significantly better than the first edition. Even if you’ve played the first version of Mansions of Madness I suggest checking out this new version. 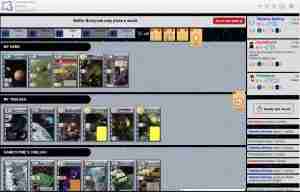 After last week’s discovery that only one player needs to have a Premium Account on Board Game Area to have access to all the games and expansions, I’ve been using that platform to play games quite a bit. Right now I have two tables going, one playing 7 Wonders

and the other playing Race for the Galaxy

. Both of these have been turn-based, not real time, so games are taking a long time to finish, but they have been enjoyable none the less. Basically, when one game ends we set up a rematch and play again.

Saturday was board game night at Brimstone Games. I pre-planned a game of Gaia Project

with another local gamer, as I’ve been really itching to try that game. Plus I want to do a review of it. Because I’m planning on a detailed review, I won’t say too much here.

, Gaia Project is not easy to teach or to learn. Thankfully this time I wasn’t the one teaching, but trying to remember all the possible actions (I think there are like 11 of them) is not easy. I’m not sure if knowing Terra Mystica helped or hindered here. There were some parts where I could just gloss over and say: yep that’s the same. But then when playing things would come up and I would be surprised to learn they were different. 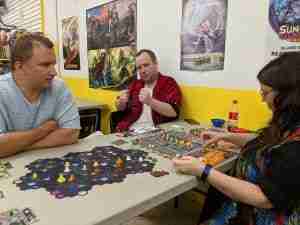 Overall the game felt heavier than Terra Mystica, but that could just be because I haven’t played it in a long time. Before I write up the formal review I plan on playing at least one game of Terra Mystica so I can do a full comparison between the two.

After our rather long game of Gaia Project we only had about an hour and a half left in the game night so I broke out my copy of Race for the Galaxy. Now my copy isn’t just Race. It’s Race with the first three expansions

in one box thanks to a great box insert. As you’ve probably read in my Box Inserts article, I really dig inserts that let me have a game and all its expansions stored and sorted in one box.

I think it’s all the playing of Race for the Galaxy on Board Game Arena that really made me want to play the physical game again. We set up a five-player game. I first took out all of the third expansion cards. This was my bad, the third expansion should be on my pile of shame, but I mixed it in when I got the box insert. I haven’t actually used those rules yet and I didn’t want to try to sit and learn them while everyone was waiting to play.

The game went well. Most of the players were only familiar with the base game and hadn’t seen many of the expansion cards but that didn’t seem to hinder anything. I didn’t score well but had a lot of fun. Every time I break out Race for the Galaxy I have a lot of fun. I still consider it one of the best games in my collection. One of my goals for the coming week or so is to get that expansion played at home so I can break out the full game sometime in the future.

So, that was it for my week in gaming. What hit your table this week?