Playing Azul at a Rather Geeky Wedding – Tabletop Gaming Weekly

This is going to be a very short look back at the games I played last week. That’s because the only game I played was the board game Azul played at a Wedding.

Back in April I wrote a blog post about playing tabletop games at weddings and it was awesome to see a friend actually put it into practice.

This past weekend I attended a great geeky wedding that had board gaming as part of the celebration. 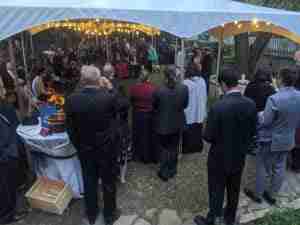 This past weekend local gamer and personal friend Jeff Szusz married his best friend Sheila. Deanna and I were honoured to have been invited and attend the ceremony and reception which were both held at Rino’s Kitchen here in Windsor.

It was a wonderful ceremony at a great venue. The food was amazing (it always is at Rino’s), the drinks were great (they even had Craft Heads beer on draft), and even the music was decent. It’s not often Deanna and I attend a wedding and actually like the music. Overall it was an awesome night and we had a great time. 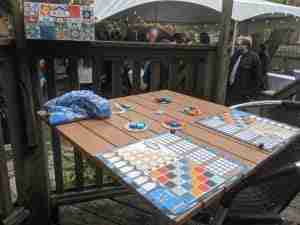 One thing that stuck out about Sheila and Jeff’s wedding is that they had plenty of tabletop games there for people to play. I knew this was going to be a thing going in and even brought some of my own games to supplement the games Jeff was providing to his guests to play.

There was a pretty decent selection of light, gateway and party games including Deep Sea Adventures

, Kerfuddle and probably a couple of games I missed

Fairly early in the night Deanna and I grabbed our copy of Azul and set it up out on the patio. This was in that time period where the newlyweds had left the ceremony to go get pictures while the rest of the guests mingled waiting for them to get back. Seeing as Deanna and I didn’t actually know any of the other guests this seemed to be a good time to play some games. 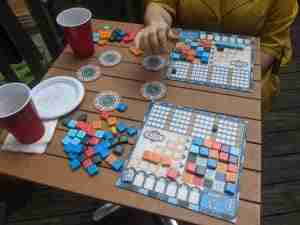 While we did get a few people come over and ask what we were playing, no one else seemed all that interested in playing games. That continued for most of the night.

It wasn’t until after some speeches and dancing started that people finally started to play some of the games. I saw some kids playing Uno and a rather intense game of Bananagrams getting played. Later in the night I spotted a table of six playing Kerfuddle. I also saw another card game I didn’t recognize being played. 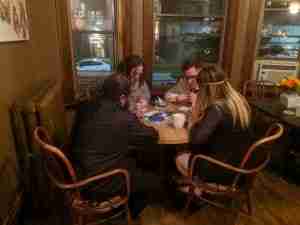 Interestingly neither Deanna or I returned to game playing. Instead we were socializing. Shocking, I know. It ends up that many of the guests at this wedding were gamers, but primarily roleplaying gamers. At the party were Jeff’s current RPG group (who are playing Delta Green right now) and his older group that split up as people got older and moved away. These were the people Deanna and I spent the night talking to. 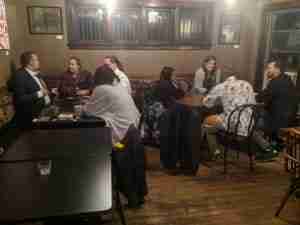 We talked about favourite systems, least favourite systems, story games, Jeff’s obsession with Indie games, D&D and Call of Cthulhu horror stories and so much more. We were having such a good time talking about games that we never actually got back to playing board games ourselves.

Despite not playing nearly as many games as I thought we would, we had a fantastic night. Congratulations Jeff and Sheila on your wedding and thank you very much for letting us be part of it!

Have you gone to a wedding that had any gaming at it? What did you play?