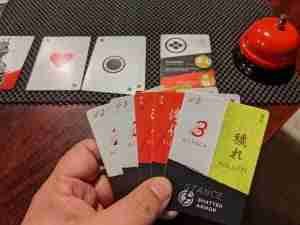 Katana: Samurai Action Card Game which was self-published by Tracy Alan after a successful Kickstarter is a non-collectable card game for two players.

In this game, players each take on the role of a samurai engaged in an epic duel with the other player. It uses a card-driven combat system and features some very appealingly designed cards. END_OF_DOCUMENT_TOKEN_TO_BE_REPLACED