Rules and How to Play Yahtzee (For Free!) 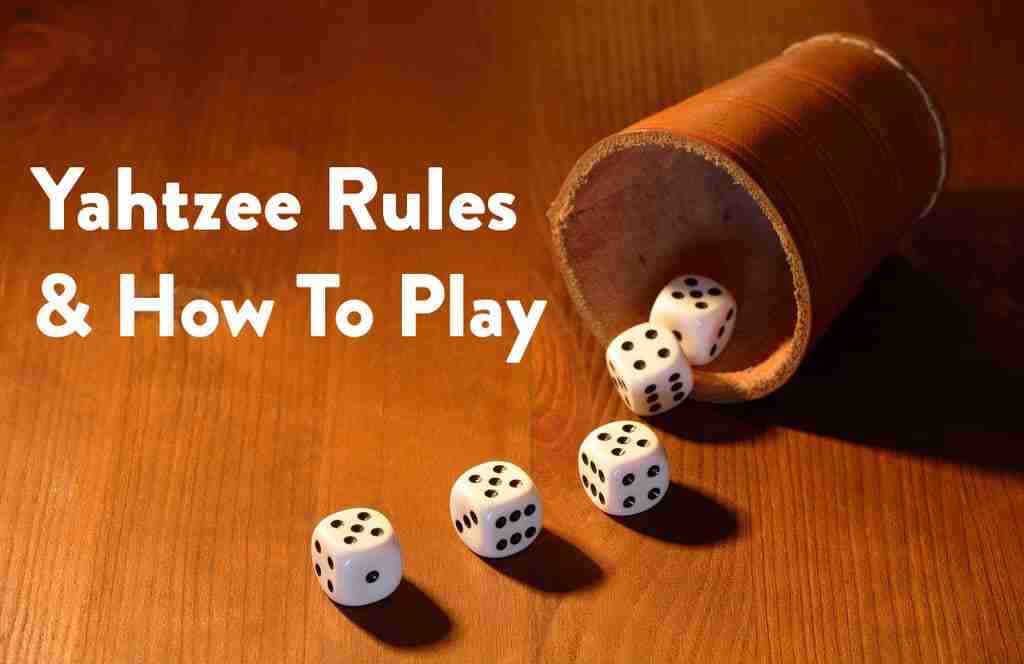 Yahtzee is probably one of the most well known dice games of all time. It’s the original role and write. It can be the perfect casual game to play with family or friends.

As you probably already know, the object of the game is to roll five dice and then try to score points by creating certain combinations of numbers on your score sheet. The rules are pretty simple, and once you get the hang of it Yahtzee can be a great game to play while socializing. It’s easy to see why this game is such a classic.

Disclosure: This is a sponsored post, paid for by Solitaired. Some links in this post are affiliate links. Using these links doesn’t cost you anything extra and it helps support this blog and podcast.

It’s easy to play Yahtzee without going out and actually buying the game. You just need five dice, some tokens, a score pad, and a copy of the rules. A dice cup is also a nice addition, but technically you can play without one.

Here’s what you need to play Yahtzee:

How to Play Yahtzee:

The game is simple, you just roll dice and create combinations on your score sheet to earn points. You play through thirteen rounds and then tally up the points to see who’s won.

To start, each player takes a scorecard and puts their name on it. To decide who starts, have each player ‌roll all five dice and the player with the highest total goes first. Play then passes to the left.

On each turn, you roll the dice up to three times while trying to get the highest scoring combination for one of thirteen categories. After you finish rolling, you have to place a score or a zero in one of the thirteen categories on your scorecard. The game ends when the players have filled in all thirteen of their boxes (a.k.a. after thirteen rounds). Scores are then totalled, including any bonus points, and the player with the highest total wins.

After taking up to three rolls you need to decide where to mark your scorecard for that round. You either fill the box of your choice with a score or with a zero.

Here’s an example of play:

First roll: Roll all five dice. If you get the exact combination you wanted, mark your scorecard right away. Otherwise, move on to your second roll.

Second roll: Set aside any dice you want to keep from the first roll (keepers) and then put the rest back into the dice cup and re-roll them. Again, if you get the exact combo you need, mark your scorecard. Still not happy with what you have? Then let’s move on to the third roll.

Enter your score: After the third roll, you need to enter something onto the scorecard, whether you want to or not. You must fill in one empty box on your score card. If you didn’t manage to fulfil any of the combinations you might need to pick a box to enter a zero into.

How to Score Yahtzee:

A Yahtzee scoresheet consists of a column of thirteen boxes. It has an Upper Section and a Lower Section. On each turn, you must choose which box to fill in based on your best scoring option. Each box can be filled in only once.

Upper Section of the Yahtzee Scorecard:

When a player decides to fill a box in the Upper Section, they count and add the dice with the same number and enter the total of these dice in the appropriate box. The goal for the Upper Section is to have 63 or more points in total. If you have 63 points or more in the upper section, you get a 35 point bonus at the end of the game.

If they aren’t happy with the roll, (for example, if they have filled in the “Fours” box already) they can fill 1 into the “Aces” Box or put a 6 in the “Sixes” box. Or the player could choose to instead score a 0 in any other empty box.

Ideally, you want to get a minimum of 63 points in the upper section so you can earn the 35-point bonus, so plan which box you are going to mark carefully. Remember, you can only fill in each box once!

Lower Section of the Yahtzee Scorecard:

There are seven different scoring spots available in the lower section of a Yahtzee scorecard. Again, it’s important to remember that you can only mark one box per turn.

Each of the Lower Section scoring combinations is explained in detail below:

“Three of a Kind”, Score Total of all Dice: This box can be filled in when a player rolls at least three of the same number.

“Four of a Kind”, Score Total of all Dice: This box can be filled in when a player rolls at least four of the same number.

“Full House”, Score 25 Points: Like in poker, a full house is when you have three of a kind and any pair.

“Small Straight”, Score 30 Points: A small straight is four sequential numbers. The fifth die can be any number.

“Chance”, Score Total of all Dice: This is a sort of freebie spot. You don’t need to roll any specific combination to qualify to fill in this box and the score is simply the total of all of your dice.

“Yahtzee”, Score 50 Points: If you manage to roll five of a kind, you get to fill in the Yahtzee box and score 50 points.

If a player rolls a Yahtzee and has already filled in the “Yahtzee” box with a 50, that player gets a 100-point bonus!

They get a bonus chip and get to place a checkmark in the “Yahtzee Bonus” box on their scorecard. They also get to fill in one of the other thirteen boxes on their scorecard according to the Joker Rules described below.

As long as they’ve already scored 50 in the “Yahtzee” box, they get a Yahtzee bonus for each additional Yahtzee they roll.

However, if they roll a Yahtzee and have filled in the “Yahtzee” box with a 0, they DO NOT earn a Yahtzee bonus. They are still required to fill in one of the thirteen boxes on their scorecard according to the Joker Rules, but they don’t earn any bonus points.

Once all players have filled in every category on their scorecard, the game ends.

Then you tally up the scores and see who’s won.

Then add the Upper and Lower Section totals together to get a final score.

The player with the highest total score is the winner!

Even though Yahtzee is a game of luck, there is a fair amount of strategy involved. With the option to take up to three rolls each turn there are plenty of decision points, leaving the player with a fair amount of control over their fate. Sometimes the dice are just going to go against you, but there are definitely strategies you can keep in mind in order to maximize your chance of winning.

Here are some tips:

Where to play Yahtzee:

To play Yahtzee, all you really need is five dice and some paper. The game also doesn’t take up much table space, so you can truly play it just about anywhere. You can print out a scoring sheet here, which can help you keep track of the scoring options. You can also play yahtzee online. Sites like Solitaired let you play against the computer or against other players.

Yahtzee has been played by generations of families, and it’s still going strong thanks to its simplicity and unique combination of strategy and luck. Does your family have a tradition of playing Yahtzee, or are you new to the game? Let us know in the comments below.