The Lord Of The Rings: Journeys in Middle Earth 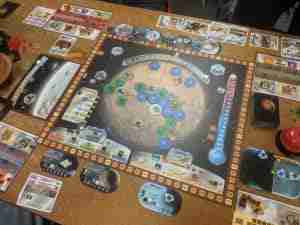 This week is a good contrast to last week where I talked about great games for a casual game night. This week we've got someone who wants 5 player games that aren't filler or party games. A gamer more after my own tastes.

Jay Gordon asks, My game group usually consists of 5 players. It's really hard to find something that plays well with 5 players and isn't a filler or party game. Do you have any suggestions? END_OF_DOCUMENT_TOKEN_TO_BE_REPLACED 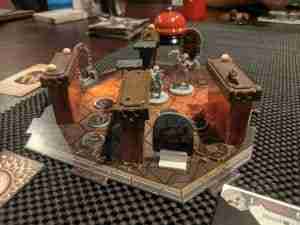 Ryan Peach writes: “Looking for a good 2 player co-op. Specifically 2 player only. As a blind meeple asking this question I'd mentally discounted [many games] I play with sighted assistance. A game where the second player does something different but still interesting and where both parties can talk to each other would do.” END_OF_DOCUMENT_TOKEN_TO_BE_REPLACED 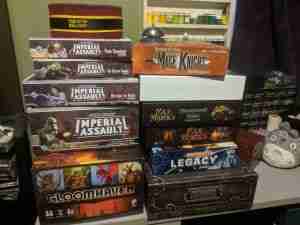 ﻿﻿﻿﻿﻿﻿﻿﻿﻿﻿﻿﻿﻿﻿﻿﻿﻿﻿﻿﻿ This is the 52nd episode of the Tabletop Bellhop Gaming Podcast, an edited version of our live show recorded on July 31st, 2019. Join us as we stream live every week on Wednesdays at 9:30 Eastern on Twitch. If you like some video with your audio, you can also watch/listen to an unedited version of the show over on YouTube.

I love tabletop games that have a campaign mode; games that tell a story that is revealed over multiple plays. Today I'm answering a question looking specifically for two-player campaign games. I'm also going to take this chance to talk about what I think makes for a good campaign game.

Kelly Jones writes, What are your suggestions for a good campaign style game good for 2 players? END_OF_DOCUMENT_TOKEN_TO_BE_REPLACED