Alhambra Review, a Return to the Classic Tile-Laying Board Game 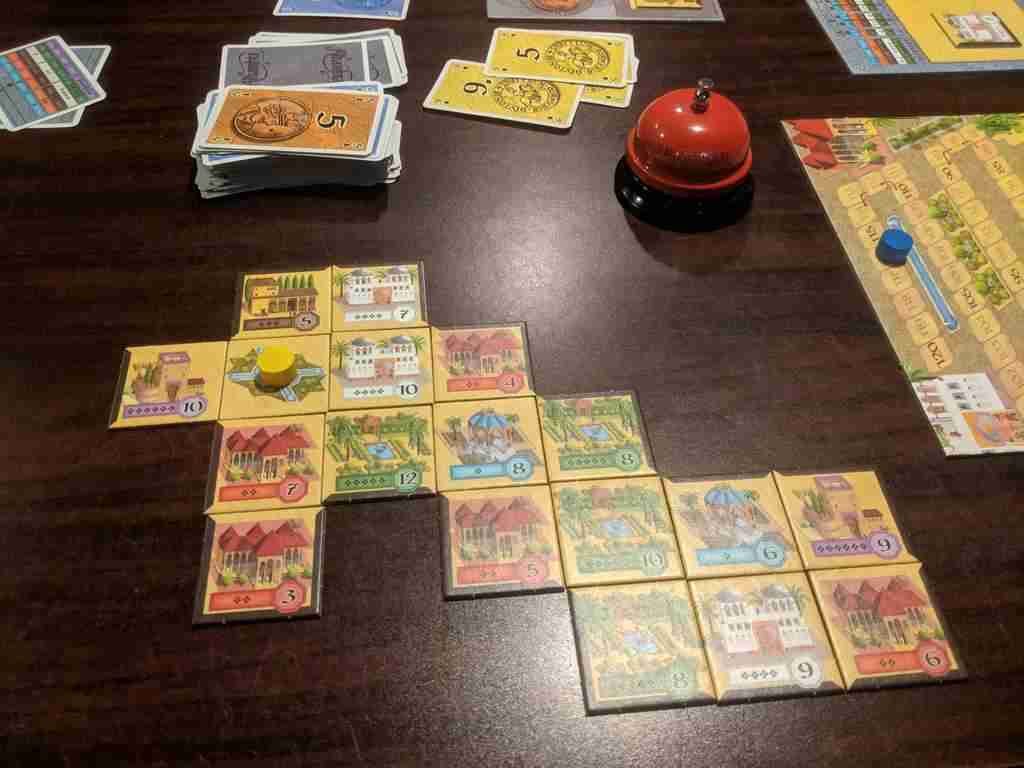 Last night on the podcast we were talking about Euro games. One of the true classic examples of a Eurogame is Alhambra. I’ve personally owned Alhambra since 2007 and recently got a chance to play it again.

Today for #ThrowBackThursday I’m going to resurrect a review of Alhambra I wrote back in March 2007.

Did Alhambra stand the test of time?

What led me to play Alhambra again?

. First off this was the next review I published on my old Windsor Gaming Resource Blog after Race for the Galaxy

(check out that review resurrection) so it just made sense to bring this review next.

Second, my podcast co-host Sean was away from gaming for quite a long time. Since we’ve started the show he’s gotten into some newer games but missed out on a lot of the classic games that came out when he wasn’t taking part in this great hobby. So whenever he makes his way down to Windsor I try to show off some of these classics.

Third, we just talked all about tile laying games where you build something, and this game is a perfect example of a game where you do just that.

Lastly, we’ve been talking about a new segment on the podcast focused on older games. We’ve commented many times that we aren’t all about the new hotness and Sean made a joke that sure we are, it’s just the new hotness from 2011. Well, I thought it would be cool to have a semi-regular segment where we talk about older games from when they actually were the new hotness.

Note: Images below are current, my initial review didn’t include any pictures.

My original Alhambra review from 2007: 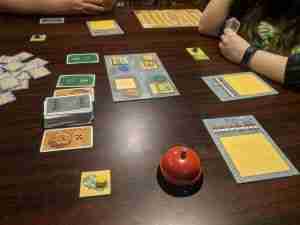 Players compete to build the best Alhambra (big palace like structure with lots of different buildings) [actually it’s a specific historical building, a fortress complex in Granada Spain]. This is done by playing tiles. Each tile represents a building in the Alhambra. There are eight different colours of buildings. Players score points for having the most of a colour of building in their Alhambra during each of three different scoring rounds.

To play, players take turns doing one of three actions. They can use money cards in their hands to buy new tiles, they can draft new money cards into their hand, or they rearrange their Alhambra. When buying new tiles, if the players exactly matches the cost of the tile with the money cards played, they get a second action. When drafting money, players can take any number of cards as long as the total of all the cards drafted is five or less, or they can take a single card valued at six or more.

Players build their Alhambra by laying tiles. Players start with a plaza tile and add more tiles around that [with each new tile having to be orthogonally adjacent to an existing tile]. The building tiles often have walls on them, these make laying out your building interesting. All buildings must be placed so that a person on foot, could, in theory, walk from the plaza to that tile, with no walls blocking the path. The walls also serve another purpose, they are worth points during each scoring round. With one point awarded for each wall section in a chain and a player’s longest chain being the only one that scores.

The Good:
Excellent packaging and full sized cards. I love games where everything has a place when putting them away for the night, and you don’t have to worry about bits falling all over the place. I also love decks of cards that are standard playing card size. 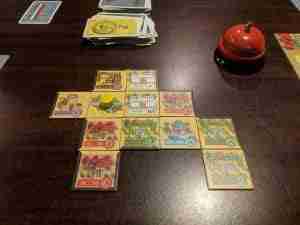 I was impressed by Alhambra’s unique gameplay. The one thing that stuck out the most about the last few games I’ve played, was the fact that the games are very different from other games that are out there. This was a tile laying game that didn’t feel like Carcassonne

. [Looking back at my BGG plays around that time (yes I was tracking game plays as far back as 2007) I was playing games like Hacienda

and Through the Desert

. All games which, to this day, I still find have rather unique mechanics.]

I found Alhambra to be very competitive. You will spend a lot of time trying to decide if you should take the tile you need, or take a tile you know your opponent will want so they can’t have it. Same with the money. [I’m guessing I didn’t know the terms “AP” or “hate drafting” back when I wrote this.] The game is pretty quick to learn, though it is a bit hard to explain. The rules are a short read but I found them easier to pick up once playing. It won’t take more than two rounds for players to get it.

The Bad:
The way the walls score has been hard to remember. The fact that walls need to go next to other walls or blank spaces when building your Alhambra seems to get forgotten. [Even the last time I played, this year in 2019 we had one player misunderstand the wall placement rules]. Alhambra features a set of contrived two player rules. It’s not a bad game with two players, but you have to toss in a third imaginary player and give them tiles. This changes the feel of the game quite a bit and just feels like these rules were forced into the game to expand its market appeal. 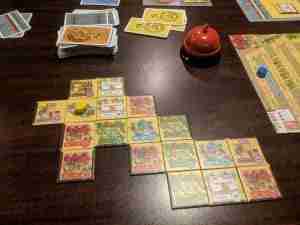 For everything I like about the way everything packages up for this one, I hate the box size. I am getting really sick of companies putting out games in odd sized boxes that don’t fit well on shelves with your older games. I miss the days of Avalon Hill when everything was a standard size and everything looked great next to each other. [Interestingly, the more recent printings of Alhambra come in a more standard box size. It’s still not that Ticket to Ride

size, it’s thinner but at least it stacks well.]

Overall:
Another welcome game to my collection. This is my second game from Queen Games and I am very impressed by their presentation and packaging (except for the dumb box size that doesn’t fit well on shelves). An excellent tile game, even better then Carcassonne and Tigris and Euphrates

My current thoughts on the tile laying game Alhambra.

That classic review was a bit harder to read than some of my others. I had to do a few more edits than expected just to make it readable. Seems I was a fan of sentence fragments. Grammar and spelling aside, I think this review still covers Alhambra well. I’ve added a few clarifications into the original review above where I don’t think I explained myself or the game well. 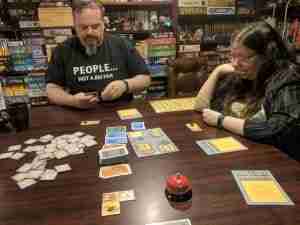 The things that amused me the most about this classic review was the complaint about the box size and the fact that at the time I thought it was better than Carcassonne. While I do still dig Alhambra, I think Carcassonne aged somewhat better. I think that’s due to how accessible it is. To this day I can get my mom to pay Carc but there’s no way she’s sitting down to play Alhambra. I do still stand by the fact that it’s better than Tigris and Euphrates despite that game being in the top ten on BGG at the time.

I also thought it was interesting that this was my second Queen Games game. Since then I’ve bought a lot of their games and to this day I remain impressed by their component quality and rules clarity. I would go far enough to say that since 2007 Queen Games has become one of my favourite publishers. Also going back to the review, I no longer miss the days of Avalon Hill. They had some great games at one time but aren’t a publisher I follow anymore. Plus I now store my games horizontally and that just doesn’t work for Avalon Hill bookcase style boxes.

Having just recently played my copy of Alhambra again I can say I still dig it, a lot. This is one of those games that sits on my shelf for months or years at a time, then I bring it out for one reason or another and play it and I’m reminded just how good it is and I find myself wondering why it took so long to get it to the table. Overall I feel that we often get far too distracted by whatever is the hot new game and we forget about games we already own that are fantastic games. Alhambra is one of those games.

So there you have my thoughts on Alhambra. It still stands the test of time as far as I’m concerned. What are your thoughts on this classic tile-laying game?