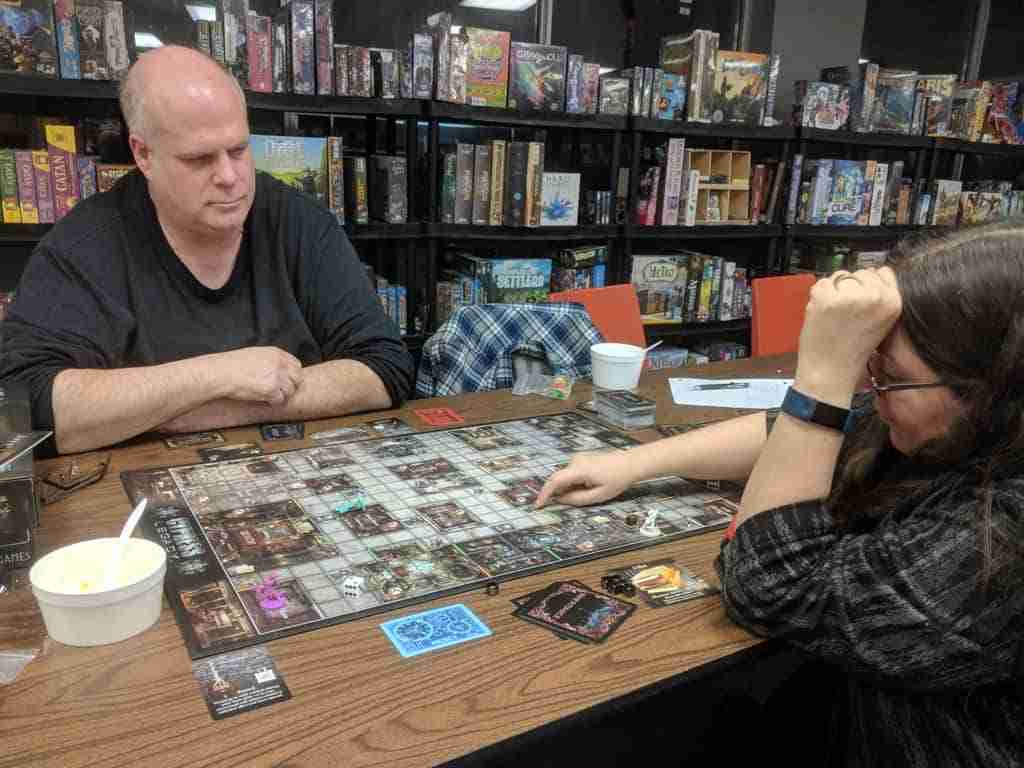 This past week I played Builders of Blankenburg with the soon to be kickstarted Fields and Flocks expansion and a couple rounds of Cypress Legacy.

These are both games I need to write up reviews on, kindly sent to me by the publishers for that purpose.

Disclosure: Some links in this post are affiliate links. As an associate, I earn from qualifying purchases. There is no cost to you, we just get a small kickback if you buy something through one of these links. Using links like these helps to keep this blog and podcast going. Both games talked about this week were provided by the publisher for me to review.

Builders of Blankenburg with Fields and Flocks (prototype) 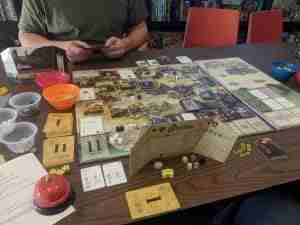 Now equipped with the proper way to play I brought my copy of Blankenburg and the expansion out to a game night at The CG Realm on Saturday. There we played a three player game, with Deanna and I along with a local gamer Chad who tends to be into heavier Euro style games. I thought that this would be the kind of game he would enjoy plus I thought his feedback on the game would be useful to pass on to the designer.

This time we played with the full Fields and Flocks rules right away. Chad is an experienced gamer and due to that I figured we could skip over playing just the base game and dive right in with the full rules.

The game went very well. It was much closer than our last game. It felt like everyone had a chance to win right up until the final scoring. Chad did really enjoy the game. He noted that he really liked the mix of mechanics, both the auction and the worker placement rules that are new with Fields and Flocks. In particular he loved the way the citizen track works, something I also enjoy and something that, so far, is unique to Builders of Blankenburg.

I enjoyed Fields and Flocks quite a bit more this play than my previous play. The expansion had a much bigger impact this game, with all three players having multiple fields and flocks going and all of us using them to both sell goods and for attaching to buildings near the end of the game. There seemed to be a more logical progression here as we understood how everything worked better this time around. 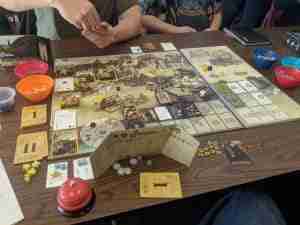 We did run into one rule problem with a pair of the new buildings, the Castle and the Convent, which both break the normal Income Phase rules by having a specific citizen visit them regardless of the three buildings listed on the citizen card. We had a situation come up where the same person should have visited both places, something that can’t happen. I’m still waiting for a ruling on this from the designer, as well as some kind of fix for one or both of the cards.

I think the most positive thing that can be said at this point is the fact that Chad now wants to own a copy of the game, though he’s going to wait for the Kickstarter for Fields and Flocks to launch next month, in hopes that there will be a backer level where he can get both the expansion and the base game together.

Reminder: The copy of Fields and Flocks I’m playing with is a prototype. The actual production components and rules may not match what you see here.

The other game I played last Saturday was a prototype copy of Cypress Legacy. Now unlike Fields and Flocks, this is a game you can order now. Also, the copy I have is 95% complete. The only thing that is missing from the copy I played were the player pawns. Everything else is production quality. 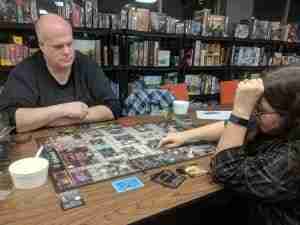 Cypress Legacy is a board game that is part of the Cypress Inheritance Saga. This is a brand that was launched back in 2015, that has spread over all kinds of media. There’s a video game, novels, a soundtrack, and even a feature film planned. I will admit I knew nothing of this multimedia “event” until hearing about the board game. 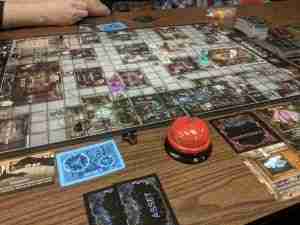 This is an old school style board game that includes a lot of dated mechanics. Mechanics I really don’t like seeing in modern games. These mechanics include roll and move, roll to escape and miss a turn. The premise is that each player is searching around the Cypress Mansion looking for Cypress Inheritance Clues in the various rooms. The first player to collect a set number of Inheritances, find a key card, and escape the mansion wins the game. Actual gameplay involves moving around a very Clue like board, collecting weapons, assets, skills, and other cards, and using those to try to find the clues and to stop other players from doing the same. There is a huge player vs. player element to this game where players can attack and steal cards from each other.

We played two three player games on Saturday and had a surprising amount of fun. Now to enjoy this game you have to embrace the player vs. player nature of it, as well as the very high random factor. I think setting player expectations before you play is the key to enjoying Cypress Legacy. While the game starts off with players collecting cards and trying to get clues, the focus quickly swaps to stopping the leader and preventing someone else from winning. Due to the random factor most of the game is reactionary instead of allowing for long term planning or strategy.

I still need to get in a few more plays before I make a final decision on this one. So far it is actually significantly better than it sounds based on the media that’s out there and reading the rules.

Well that was my #WhatDidYouPlayMondays. What did you get to the table this week?